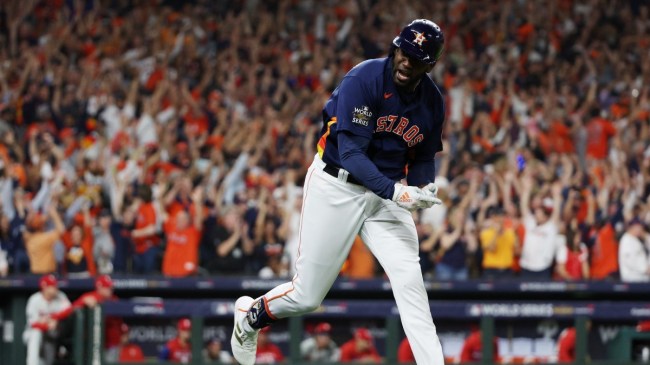 Yordan Alvarez is one of the best hitters in all of baseball. The Astros’ designated hitter slugged over 1.000 this year and is just a pure hitter of the baseball. He hits for high average and power and is quite the weapon in the middle of the Houston lineup.

With two runners on in the sixth, Alvarez hit a home run that will be remembered forever.

What a moment for Alvarez and the Astros, assuming they hang on. But, what a terrible pitch by José Alvarado. He put it right in Alvarez’s sweet spot.

Still, it was an absolute bomb.

Yordan Álvarez's home run went 450 feet, but if you transposed the first two digits I wouldn't have been surprise.

Here’s another look at the homer.

Hitting a home run must be so cool pic.twitter.com/3W3SizSPbw

That gave Houston a commanding 3-1 lead. They tacked on another run in the inning. They’ll try to close the game out and bring the World Series back to Houston.