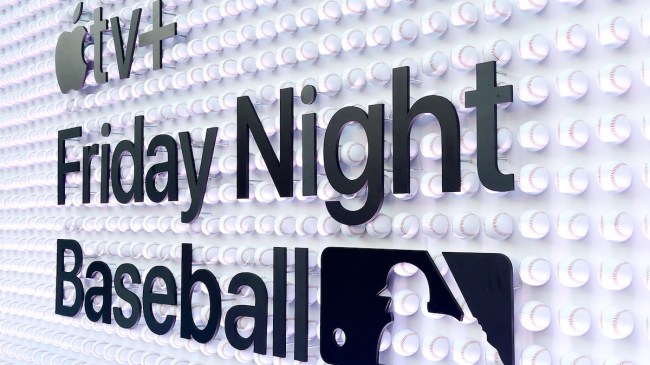 When the MLB announced its partnership with Apple TV+ fans weren’t exactly happy and Friday’s Yankees-Red Sox game gave them even more reasons to rip into the streaming service.

Before the season started, the MLB struck a deal with Apple TV+ allowing the platform to air a weekly doubleheader on Friday nights. The immediate complaint from fans was around the accessibility of watching baseball, which Apple TV had seemingly made more difficult now.

That same concern was relayed ahead of Friday’s game as Aaron Judge pursued the AL single-season record of 61 home runs. Jokes centered around how no one would witness the historic achievement since few people owned Apple TV+. The game was made available without a subscription though, so all fans could actually tune in.

However, once the game was underway, the complaints quickly shifted onto the Apple TV broadcast crew. Stephen Nelson, Hunter Pence, and Katie Nolan were on the call for this particular game.

From mistaken identities to questionable commentary and bad moment after bad moment, Apple TV+ had MLB fans up in arms.

Fans probably could’ve guessed how the evening would go by how it started. Within the first 10 minutes, the announcers incorrectly referred to Yankees manager Aaron Boone as Aaron Judge.

Apple TV off to a HOT start pic.twitter.com/JISCAmfZzE

“There is Aaron Judge, the first manager ever to make the postseason in each of his first five seasons as a major league manager.”

At least the confusion is understandable with both individuals being named Aaron. How they managed to mix up Giancarlo Stanton with Judge is a different story though.

Judge is undoubtedly one of the hottest names in baseball at the moment. Somehow mistakenly calling not one but two different people by his name on live broadcast is just mind-blowing.

The crew went on to prove that statistics weren’t their strong suit either. In one instance, they compared Judges’ home runs this season versus lefties and righties. The commentary seemed to imply he was better against righties but left out some rather important context.

"Judge only has 13 homers vs leftys but 47 vs righties"

The announcers also claimed that the gap between Judge and Xander Bogaerts for the AL batting average leader couldn’t get smaller because the latter wasn’t playing. It’s a statement that’s just mathematically false.

Also Bogaerts isn’t in the lineup so the batting avg race can’t get smaller, only bigger tonight according to Katie Nolan of Apple.

There was even a moment where they asked Roger Maris Jr. about his father’s record that Judge is chasing. But the fact it happened 61 years ago when Maris Jr. was 3 years old makes you wonder how much thought they put into the question.

“(Roger Maris Jr) you were 3 years old when your father broke the record, is there anything you remember from that day?”

For those craving to see every single mishap from the Apple TV crew on Friday night, a Twitter user put together an amazing thread. Fair warning, it’s long but packed with comically bad moments.

The Yankees closed out the game 5-4 over the Red Sox. Unfortunately, Judge did not homer and some fans saw that as retribution for the Apple TV+ broadcast.

Other fans focused on Apple TV’s outstanding video quality for the one positive note that came from this broadcast.