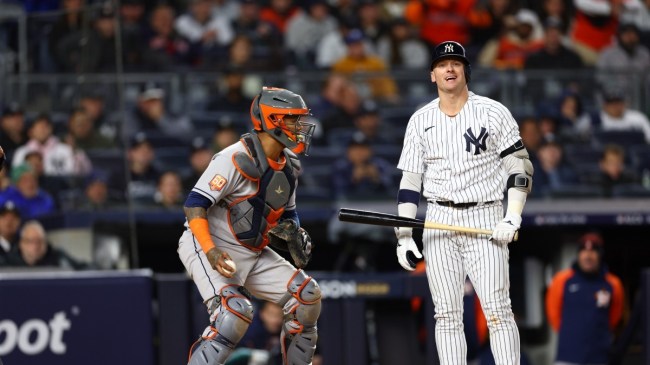 It’s been a Yankees season to remember. The Bronx Bombers got off to a blistering start with people comparing them to the legendary 1998 Bronx Bombers. But, the late Summer months weren’t great, and they finished just short of 100 wins, with 99. Of course, the backdrop to the entire season was the historic power-hitting of Aaron Judge. He finished with the Yankee and American League record of 62 home runs.

Even with a not-great finish to the regular season, New York had a chance to bring home their 28th World Series back to the Bronx. But, it was not to be.

New York took a 3-0 lead, but a Jeremy Peña home run tied it at 3 in the 3rd inning. From there it was a back-and-forth game. The Astros took the lead in the 7th inning on an Alex Bregman single.

THREE RUN BOMB FOR JEREMY PEÑA AND THAT THREE RUN LEAD THERE IT GOESSSS SEE YA!! pic.twitter.com/IQFneB1Bgj

New York was unable to score, and Aaron Judge made the last out with a routine grounder back to the pitcher, as they lose, 6-5.

Things are not well in Yankeeland.

Whether it’s on Twitter or on Reddit, fans are despondent and almost all of them want some Yankees management fired.

Embarrassing ending. The Astros own the Yankees. No excuses. It’s that simple. Another failure of a season. Hopefully it leads to a full organizational overhaul. Cashman needs to go. Boone needs to go. The whole front office needs to go.

But nothing will change.


The Astros have now beaten the Yankees in the playoffs three times in a row.

And, this was a group of Yankee players who many never trusted due to lack of mental toughness. Sure enough, they went out with a whisper.

out in a whimper. a fitting end for this team. burn the front office to the ground. #NYY

This is a shocking stat for general manager Brian Cashman. This just cannot happen as the New York Yankees.

Another year, another disappointment in the Bronx. The free agency of Aaron Judge awaits.