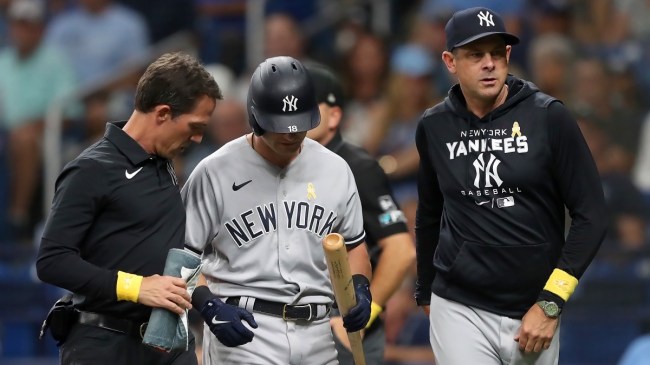 Yankees fans are devastated by the news that star outfielder and trade-deadline acquisition Andrew Benintendi is out indefinitely with a broken hamate bone in his hand. Benintendi has been placed on the injured list and is feared to be out for the season in the midst of a suddenly-competitive American League East.

Andrew Benintendi broke the hook of his hamate bone and will need surgery, Aaron Boone said.

The news comes at a bad time for Yankees fans

It’s been a rough few months for fans of the New York Yankees. The Yankees stood at a remarkable 61-23 on July 8th and had a 15 1/2 game lead in the American League East at one point. But, a slow July and the worst August in the history of the storied franchise now has their lead over the Rays down to just five games, after the Yankees salvaged the final game of their series on Sunday, 2-1. Still, Yankee fans think the team is in a meltdown.

One of those fans is @SlamCentralNYY, who thinks the Yankees’ slide is among the worst in professional sports history.

The New York Yankees are having the most catastrophic meltdown and collapse in the history of professional sports.

The Yankees knew they needed outfield help at the deadline, so they acquired Benintendi from the Royals. The former Red Sox was hitting .320 with the Royals this season, and even though that had slowed to a .254 clip in the Bronx, he is a considerable upgrade over Aaron Hicks in the minds of most Yankee fans.

@ForrestJordan11 would rather have Benintendi, who is also good defensively, play with a cast over the much-derided Hicks.

According to a study done by The American Society For Surgery of the Hand, the average return-to-play length was six weeks from the injury. But, Benintendi thinks he may be able to return for the end of the regular season for the Bronx Bombers.

Andrew Benintendi said he will speak with specialists in NYC, but he thinks he may be able to return before the end of the regular season. He had a similar injury as a college freshman.

It remains to be seen when the outfielder will return to play, but the Yankees need that to be as soon as possible.