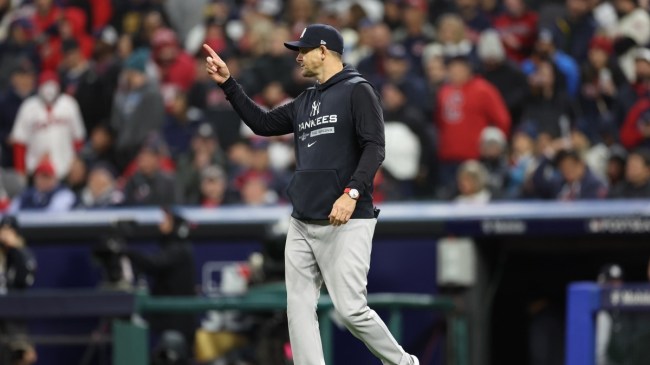 The once-promising New York Yankees season is on the brink of ending in complete disaster. After a 6-5 loss to the Cleveland Guardians that saw Aaron Boone’s Bronx Bombers lose a two-run lead in the bottom of the ninth inning, the Yanks are one loss from elimination.

The media asked Boone about his bullpen management after the game. He gave one of the worst possible answers anyone could ever give in a press conference.

Boone said closer Clay Holmes was only available in an emergency

During the 9th inning, the Yankees turned to Clarke Schmidt with the game on the line, as Cleveland had runners on 1st and 3rd down 5-3 with one out. Schmidt is normally a long reliever, but that’s who Boone went with. A few batters later, Schmidt gave up the winning hit.

First off, great win for the Guardians, whose payroll is 1/3 the size of New York’s.

But, the focus goes to Yankees manager Aaron Boone, who said that his closer Clay Holmes was only available in an emergency.

Aaron Boone says Clay Holmes was only available in an "emergency" tonight: pic.twitter.com/8Aw8NhH4Hm

Wait, does the winning run at the plate in game three of a tied ALCS not constitute an emergency? Was he waiting for a nuclear war to break out?

Clay Holmes told Boone and the coaching staff he was ready to go and they didn’t use him. It’s the playoffs. And they treated this situation like it was a random game in May. That is infuriating and unacceptable. I try to be level-headed and positive but that’s bullshit.

Just gonna stare at this in rage for hours https://t.co/NqVPpEyjLr

If Aaron Boone hits a double instead of a homer he’s working at a Kinkos right now.

Yankees needed 10 outs from the pen

This is how Boone drew it up

They better figure it out, because the Guardians have a chance to clinch at home Sunday night. Gerrit Cole will take the mound for New York.