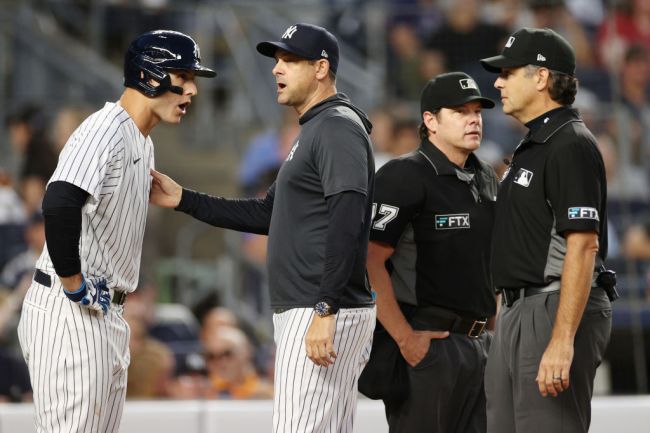 The New York Yankees haven’t had the best of luck in August and it appears some frustrations are boiling over.

Despite remaining atop the AL East, the Yankees have struggled as of late. They’ve fallen behind 2 ½ games to the Houston Astros by going 3-9 so far this month. It didn’t help that they were on the wrong side of a historically awful performance from umpire Ed Hickox when facing the St. Louis Cardinals.

Things didn’t get any better on Monday night when the Yankees took on the Tampa Bay Rays. In the bottom of the 3rd, Yankees first baseman Anthony Rizzo was hit on the thigh by an inside pitch from Ryan Yarbrough.

Rizzo takes off for first, but umpire D.J. Reyburn immediately waves it off. Apparently, the Yankees first baseman hadn’t made enough effort to get out of the pitch’s way. The unreviewable call left the announcers unsure and Rizzo was furious.

Disagreement after Rizzo gets plunked pic.twitter.com/hxg00m12Xb

Yankees manager Aaron Boone quickly made his way out to calm Rizzo and plead his own case to no avail. Rizzo would step back up to the plate only to then strike out.

It’s not often you see an umpire make that decision, but it’s ultimately up to their judgment. Obviously, Rizzo didn’t agree with the call and he let his anger be known once returning to the dugout.

This is rare out of Rizzo pic.twitter.com/EN9m33RimJ

It’s only fitting Rizzo lets out a rare reaction for a rare call. Although Yankees fans will certainly debate whether umpire D.J. Reyburn made the right call.

The New York Yankees would go on the lose 4-0 to the Rays and Anthony Rizzo struck out in his next two plate appearances. He didn’t hold back after the game either, bluntly stating the umpires had screwed him over.

Rizzo reacts to the umpire's ruling that he leaned into the pitch that hit him pic.twitter.com/ukWNldpXPj

With the MLB postseason not too far away, the Yankees are contenders for the World Series. But if a deep run is in the cards, they’ll need their luck to turn around soon.