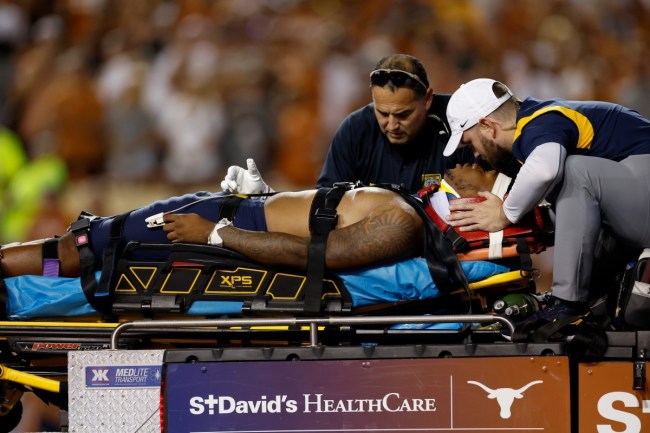 It’s been a poor season for the West Virginia Mountaineers. Coach Neal Brown is firmly on the hot seat after a 2-3 start that includes a loss to rival Pitt in a winnable game in week 1, a home loss to Kansas, and getting blown out by Texas.

But, one bright spot has been freshman running back CJ Donaldson. The Florida native rushed has 380 yards on just 52 carries in the early going and looks to be a back to build around.

Donaldson was immobilized by medical staff with a head injury.

What looked like a routine carry ended with CJ Donaldson on a stretcher.

Prayers up for West Virginia RB CJ Donaldson. They have the stretcher and cart out for him after this hit. pic.twitter.com/FobrWJvagq

I was watching this live, and at first glance I thought he hurt his leg because it definitely turns a little funny. But, he just laid there. It was a very scary scene. It took a long time for EMT personnel to get him off the field.

The silence in the stadium as they load West Virginia RB CJ Donaldson on to the cart is a reminder of how dangerous this sport is. We love to watch it but there are risks. Prayers up for that young man who was having a really nice game.

credit to Texas fans for giving Donaldson an ovation as he was wheeled off.

Kudos to the @TexasFootball family and all the fans at DKR for putting on a master class in grace and compassion.

May God guide the hands, hearts, and minds of the medical staff in Austin who will care for CJ Donaldson Jr.

West Virginia fans were obviously worried for their star back.

This game no longer matters…praying for CJ Donaldson.

but, they would soon get good news.

Soon after the game, we got an update on his status.

Neal Brown says CJ Donaldson is alert, stable and has movement in his extremities. He is awaiting further testing.

Excellent news for the freshman RB after a very very scary injury.

Later on, West Virginia announced a statement on the running back.

This basically the best-case scenario after the initial hit. Hopefully he continues to recover well and can return to action quickly.