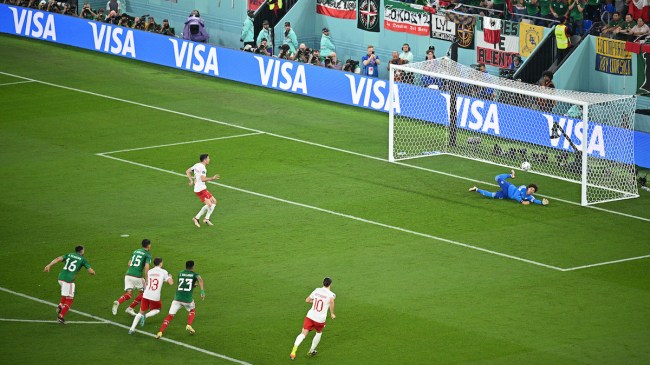 Guillermo Ochoa has developed a reputation for delivering on the big stage and it only took the Mexican goalkeeper one game into the 2022 World Cup to produce another world-class moment.

Mexico kicked off their Group C matches on Tuesday against Poland with a goalless draw, but it wasn’t without excitement. The first half was fairly uneventful as Mexico dominated possession and narrowly missed a few opportunities. However, it was Poland’s Robert Lewandowski who had the best chance to break the deadlock.

Lewandowski earned a penalty roughly 10 minutes into the second half after a VAR check ruled that Mexican center-back Hector Moreno had fouled him inside the box. Most fans expected the Polish striker to easily score his first-ever World Cup goal, but Ochoa had other plans.

The Mexican goalkeeper guessed the correct direction and made an incredibly clutch save to keep the game tied 0-0.

Plus Play of the Day sponsored by @walmart #WalmartPlus pic.twitter.com/OibNMRwVZY

Ochoa made 2 saves total while helping Mexico to a scoreless draw to start off the tournament. His penalty save was definitely the most crucial play of the game and fans were in disbelief. Even at 37 years of age, he somehow just keeps performing on the big stage.

Ochoa first made headlines during the 2014 World Cup in Brazil. He made four remarkable saves to hold the host country to a scoreless draw and earned man-of-the-match for his performance.

Then he made headlines again in 2018 when facing Germany. He made a total of 9 saves and secured a clean sheet in the 1-0 victory over the defending World Cup champions.

Four years later, Ochoa is clearly still at that elite level. It only took him one game to showcase it and fans are all on board the hype train.

If the World Cup is happening, you can seemingly expect Ochoa to deliver some clutch saves for Mexico. Even though he has spent the last three years at Club América, some fans are convinced he only shows up for the World Cup.

I’m convinced Ochoa doesn’t even play club football. He just comes along to World Cup every 4 years to cause chaos.

To top it all off, he earned a well-deserved man-of-the-match for his performance on Tuesday.

Mexico's Ochoa has been named Player of the Match 🇲🇽👏👏 pic.twitter.com/Uo1Vv5MbtX

After Saudi Arabia’s surprise upset over Argentina earlier in the morning, Mexico and Poland are tied with 1 point in Group C.

Ochoa will likely have his hands full on Saturday against Leo Messi and Argentina, but the Mexican goalkeeper has certainly proved that he’s up to the task.