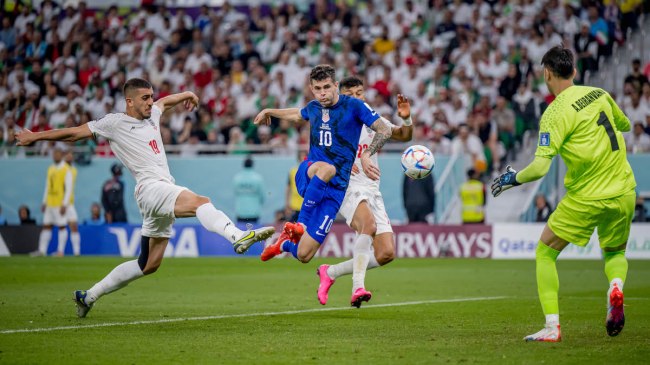 The USMNT advanced to the 2202 World Cup knockout stages with a 1-0 victory over Iran on Tuesday, but it wasn’t without sacrifice.

Christian Pulisic scored the game-deciding goal in the 38th minute and took a brutal knee to the groin in the process. The Chelsea winger spent several minutes on the sideline in clear pain while trainers treated him. He returned to the field but was ultimately subbed off at halftime to due an abdominal injury.

A United States Soccer Federation spokesperson later confirmed that Pulisic had been taken to the hospital for scans. Luckily, American soccer fans can let out a sigh of relief as it appears the injury isn’t too severe.

Shortly after the final whistle blew, a photo surfaced showcasing Pulisic celebrating the USMNT’s victory from his hospital bed.

The USMNT star looks overjoyed in the photo with a giant smile and fist pump despite his injury. He praised his teammates’ second-half performance and even quelled any concerns that he may miss the USMNT’s next match.

“So f**king proud of you guys I’ll be ready Saturday don’t worry,” he wrote in the photo.

According to Pulisic, he’ll be ready for Saturday’s knockout stage match against the Netherlands. It’s outstanding news for the USMNT.

The young American team will have their hands full against a talented Dutch side, especially if Pulisic is unable to play. Thankfully, it appears that won’t be the case.

Pulisic will look to lead the United States beyond the Round of 16, but he’s already solidified himself as an American legend even if it all ends on Saturday.