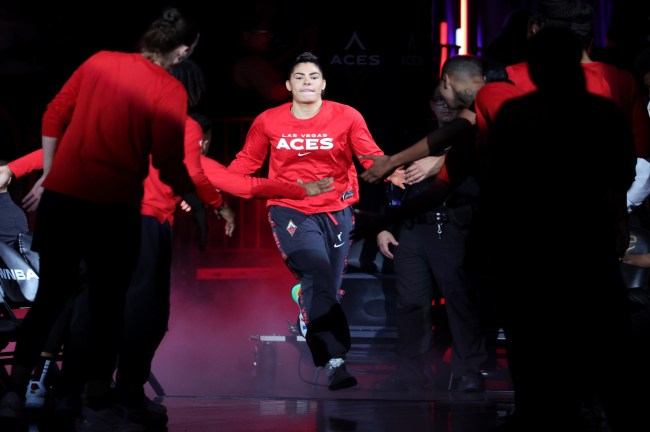 The WNBA caught a ton of heat a few weeks ago during the All-Star Game. The game was surprisingly entertaining, and Las Vegas Aces star Kelsey Plum put on a show.

Plum then walked away with the All-Star Game MVP award. However, everybody was focused on the size of the trophy — which was unbelievably small, and fans ripped the WNBA for it.

Plum’s face said it all, and everybody wondered why it was so tiny. Then, after the Aces won the Commissioner’s Cup, WNBA commish Cathy Engelbert gave Plum a new trophy.

However, this one was EVEN SMALLER.

Engelbert was having a good time, and Plum and all her teammates enjoyed this one after winning the cup.

Kelsey Plum was fantastic during the cup, finishing with 24 points, six assists, a pair of steals, and a pair of rebounds while knocking down six three-pointers.

Kelsey Plum was just ON FIRE from beyond the arc in the 2022 #CommissionersCup championship presented by @coinbase @kelseyplum10: 24 PTS, 6 AST, 2 REB, 2 STL, and shot 6-9 from the three-point line 🎯 pic.twitter.com/QxJs4nudN4

For those unaware, the Commissioner’s Cup is an in-season tournament and an interesting wrinkle for the sport, something the NBA has started to consider recently.

Still, this was elite-level trolling from Engelbert, and at least the Commissioner is having a good time and embracing the jokes heard around the country after the initial All-Star Game MVP trophy went viral.