WATCH: Summer League Referee Richard Jefferson Gives Us Plenty Of Golden Moments And He Says He Wants To Be Back In 2023 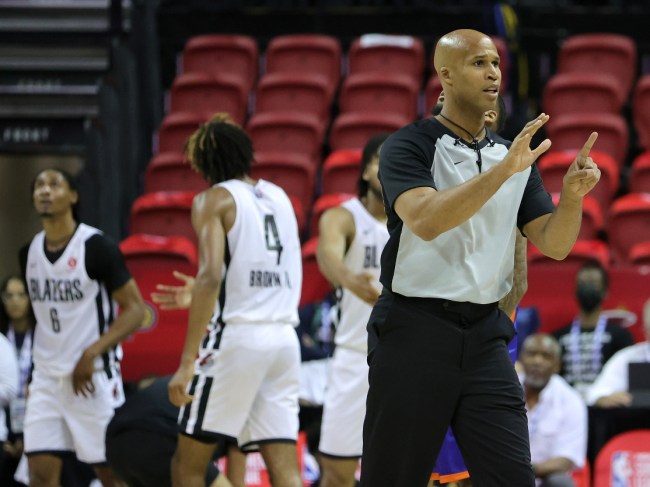 The Las Vegas Summer League has given us plenty of wonderful moments. The debuts of Chet Holmgren, Jabari Smith Jr., and Paolo Banchero have been the highlights. The much-anticipated battle between Paolo and Chet was done away with after the Orlando Magic shut down their No. 1 pick for the rest of the time in Sin City.

But, Monday night gave us something new. It was the NBA referring debut for Richard Jefferson. Jefferson put on the ref uniform in the second quarter of the Portland Trail Blazers-New York Knicks game.

This quarter of basketball seemed to last for an eternity, and Jefferson gave everybody plenty of hilarious moments.

His first call was overturned by himself after he consulted with another referee.

.@Rjeff24 changed his first-ever call as an NBA official 😅 pic.twitter.com/F9ffWzUs79

The moments kept coming, and he seemed to be having a terrific time on the court.

But, one fan didn’t love it and Jefferson now has a heckler!

A Las Vegas Summer League heckler welcomes Richard Jefferson to the court for his officiating debut: “You suck, Richard!” pic.twitter.com/ugNkNF8u5c

Jefferson even admitted it was fun while discussing with the other refs.

"This is fun. I can see why this is addicting."@Rjeff24 was mic'd up during his NBA referee debut 👏😅 pic.twitter.com/tZOwvynP4q

Jefferson even forgot to signal a made basket — although everybody knew it was good.

RJ forgot to signal it but the bucket is GOOD 🙌

The fans loved it and gave Jefferson an ovation every time he bounced the ball to the free-throw shooter.

Who says Summer League isn’t a fun time? Jefferson also said he wants to do this again in the future.

.@Rjeff24 says he wants to ref again in next year’s summer league 😂 pic.twitter.com/MkvZMTxm0j

So, the 2023 Las Vegas Summer League might see another appearance from Jefferson. Oh, and here’s his statline.

See you next year, Richard Jefferson!