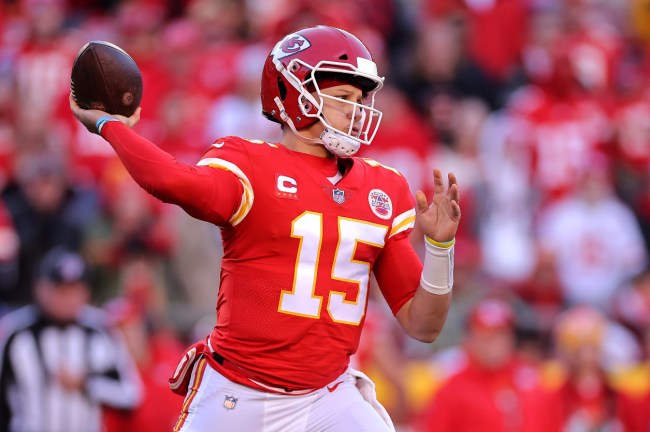 The Kansas City Chiefs lost Tyreek Hill this offseason to the Miami Dolphins. That’s a significant downgrade on offense, no matter how you view it.

However, as long as Patrick Mahomes is in town, the Chiefs will be one of the best offenses in the NFL. The Texas Tech product continues to leave everybody in disbelief season after season. He has an electric arm, a terrific football IQ, and makes plays we have never seen before.

Mahomes is already practicing his patented behind-the-back pass and was working on it during training camp.

He makes that look way too easy.

We have seen this plenty of times from Patrick Mahomes.

The 20 yard behind the back pass from Patrick Mahomes: pic.twitter.com/GNNMQaVRk4

We also saw Mahomes throw with his LEFT HAND.

Mahomes just might be completing a behind-the-back pass in a game this season. With #15 at quarterback, who knows what will happen.

Sure, Tyreek Hill is gone, but the Chiefs’ offense is still lethal, and they added Marquez Valdes-Scantling, JuJu Smith-Schuster, and Ronald Jones. Oh, and that guy named Travis Kelce is still around.

Even though people seem to be sleeping on Patrick Mahomes — RG3 had Mahomes questionably low on his QB list — there is no reason to doubt the talent.

Mahomes does things like this regularly, and it’s almost hard to believe. Let’s see if he does it in a game next season or not.