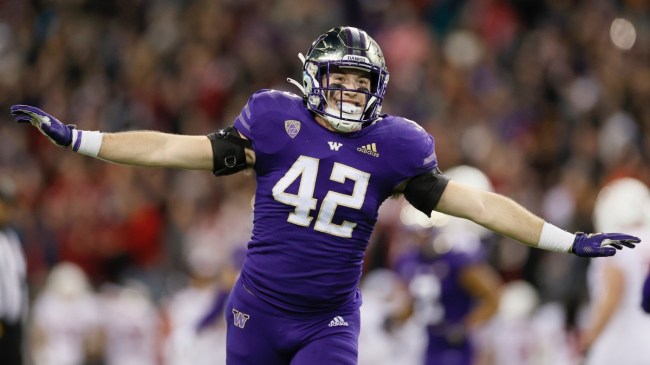 The University Of Washington has recently met with the Big Ten to discuss a potential move to the storied conference, Brett McMurphy of the Action Network reports.

As we all remember, USC and UCLA have already bolted to the Big Ten, and expect to begin play in 2024 in all sports. And, the Big Ten has not been shy about the fact they want to do even more expanding.

Two weeks ago, the Big Ten signed a massive media deal that shattered any and all records relating to media deals in college sports, and it’s no wonder that schools like Washington do not want to be left behind in an arms race that increasingly feels like do-or-die.

Washington is a great fit for the conference, with excellent academics to go along with one of the strongest athletic programs on the West Coast located in a huge Seattle market.

This is bad news for the PAC 12. The conference is at risk of further decimation and is fighting off attempts from the Big 12 to poach teams as well. The recent news of Washington and Oregon meeting with the Big Ten has made it that much harder for the PAC 12 to try to maneuver to a better TV deal, according to CBS Sports’ Dennis Dodds.

Just wondering: With reps from Oregon and Washington talking to the Big Ten how does @pac12 get a deal (read: grant of rights) done right now? The advantage for @Big12Conference in moving up talks, it seems to me, is that it can offer 12 as a united front if nothing else.

And while Michael Schottey of The 33rd Team thinks it doesn’t make any sense, anonymous twitter user Eisman57 elaborated on why he thinks the Huskies would be a good fit, albeit he was tongue-in-cheek.

Washington is a better historical program than many realize. It has a national title in 1991, a playoff appearance in 2016 and is in the top 20 in wins and winning percentages.  Chris Petersen had it rolling in Seattle, but Jimmy Lake squandered that momentum and the program brought in Kalen Deboer to be its head coach starting this season.

Yellowsnow on Dawgman, a 247 sports site, has plenty of confidence that Washington can be competitive in the Big Ten, if they enter the conference.

“Some here complain about things not following their own personal preference, but I’m only interested in what is BEST for the University of Washington. We can rise to the occasion in the B1G, even if it’s not instantaneous. Even the most put-upon fans will follow the wins. Just as landing in a small conference will make games easier, but relevance harder and fans, eventually, will be bored/disillusioned with wins against teams no one cares about. Sooner or later, every team with ambition wants to hear Welcome to the Machine (where the big games are played and the big money made),” they said.

svylrDAWG has a different opinion. He thinks Washington would be better off staying put.

“Still like staying in the pac and I know I’m one of the few. Prefer standing out on the west coast to locked in the many in the B1g. Win and the $$$ and national exposure will come. Being an also ran even while sharing the big bucks has little appeal. Being another Nebraska has no appeal,” they said.

It’s unclear how imminent any moves are by the Big Ten, with the timeline believed to be related to when Notre Dame makes their decision.
Washington opens up their season against Kent State Saturday, September 3 at 10:30ET