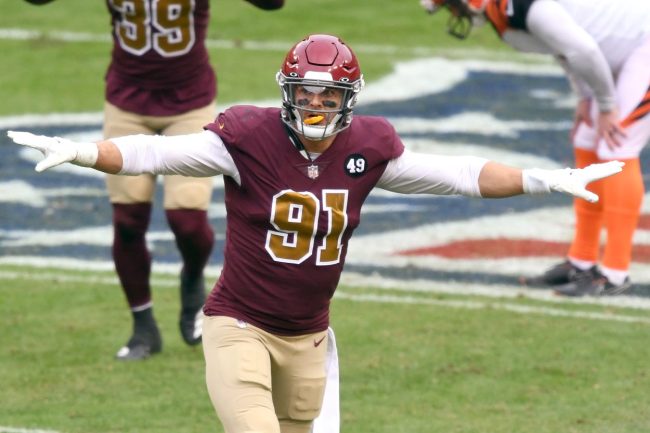 Along the way, Kerring earned four Pro Bowl selections (2012, 2016-2018) and became a team legend. Now, the defensive end/outside linebacker out of Purdue is calling it a career.

Kerrigan signed off with a heartfelt message to fans and the Commanders organization.

“…And to my beloved Washington fans: you guys made my NFL experience Amazing. I felt at home in the DMV from day one. Whether it was cheering for me on my game days, supporting my philanthropic endeavors or just saying “hi” at the grocery story, you made me feel like one of your own. I’m proud to call D.C. “home” and I’m so thankful that I was drafted here because of the way you’ve treated me and my family. I’ll love you guys forever.”

His touching message pulled on the heartstrings of Washington fans across the internet.

In tears! So proud of you @RyanKerrigan91!! It’s been a pleasure to root for you and thank you #WAS for making this happen! Enjoy the next chapter! https://t.co/SRwq5U6zAW

No slander ever from me for Kerrigan. One of the very few bright spots in the Snyder era & he wanted to be in DC. Salute 91 🫡 #HTTC https://t.co/8akAKQ6H2W

I remember the day he got drafted like it was yesterday 😩 immediately became a fan and has been one of my favorite players since.
I will still faithfully wear his jersey idc! ❤️ https://t.co/Xw7ASdJ9wI

Was fortunate enough to get to know Ryan when I was with the team in college and he is a great dude. One of my favorites all time. Should definitely go into the Ring of Fame.

Team owners Dan and Tanya Snyder also put out a statement thanking Kerrigan for his time in DC.

“Ryan is one of the most accomplished players in franchise history both statistically and in how he carried himself both on the field and off the field in the community. We are honored that Ryan reached out and wanted to sign a one-day contract with the organization.”

Kerrigan’s 95.5 career sacks make him the franchise’s all-time leader, and there’s no doubt he’ll be remembered by fans for a long time to come.