Washington Commanders Fans Are Furious At New $3 Billion Stadium Proposal Outside Of D.C. 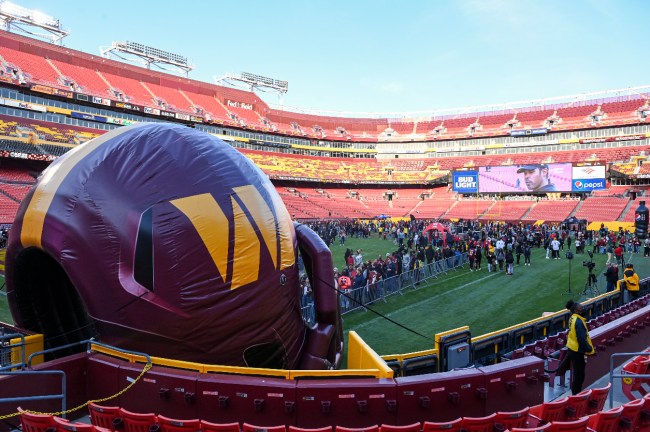 The Washington Commanders unveiled a massive $3 billion proposal for a new stadium and a mini-city. The stadium idea looks impressive, and the surrounding entertainment aspects certainly make for a fun time in the Commanders area.

However, there is just one problem for Commanders fans: The stadium is in Virginia.

The Washington Commanders have unveiled plans to build a $3 billion "mini-city" surrounding a new stadium.

Yes, the stadium proposal is for Woodbridge, Virginia, some 34 miles away from FedEx Field, where the Commanders currently host their games.

That thought didn’t set very well with the fans.

Fans wasted no time expressing their frustrations with the plans for a Virginia stadium.

People who don’t know the DC area well won’t understand this, but it could not be more hilarious that they’re putting this in Woodbridge of all places. It’s like if the Jazz built a new arena in Kaysville. https://t.co/T0F7mZLrVv

If the Washington Commanders build a new stadium in Woodbridge, Virginia…I'm telling ya, just give the Baltimore Ravens all of Montgomery County, Maryland and Prince George's County, Maryland.

IMO, this potential move would destroy the Commanders fan base in Maryland. https://t.co/RJjQgKoACm

This wouldn’t be the first time a team plays in a city other than their name. Remember that the Angels are called the Los Angeles Angels of Anaheim.

Now, the stadium idea is fantastic and unique. The plan includes a mile-long walkway of shops, restaurants, and other attractions that will hopefully draw in people all year long, as Front Office Sports mentions.

An amphitheater, convention center, and office spaces are other aspects included in this proposal, and as a whole, this seems like a massive win for the Commanders.

But, there’s just one problem: Moving to Virginia.

Would they change their name to the Virginia Commanders? Probably not, but who knows. Maybe they will be called the Washington Commanders of Virginia.

The Washington Commanders of Virginia? https://t.co/6tdmx740vo

That would mean another rebrand, so probably not.

Nonetheless, the Commanders are going for it all and want to move out of London County.