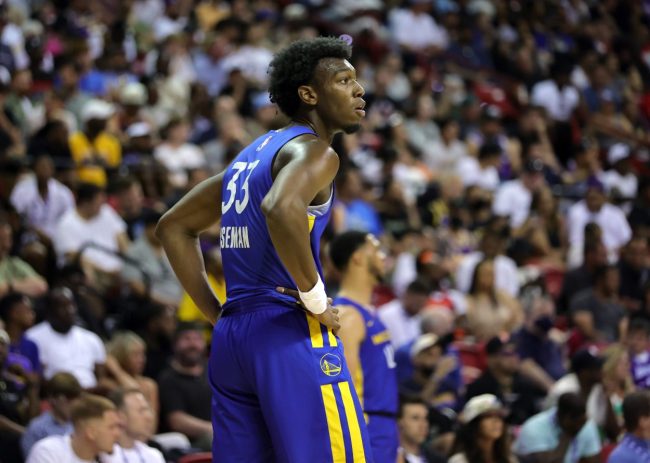 The Dubs returned to the mountaintop in the NBA this past season, winning yet another championship and their entire core looks set to return in 2022-23 as well. But perhaps even more impressive is that Golden State looks set to be a force to reckoned with even after the Steph Curry, Klay Thompson and Draymond Green era.

Major injuries to Thompson and Green could’ve easily derailed the Warriors dynasty. Instead, they only look to have extended the run. After a terrible 2019-20 season, Golden State took Memphis center James Wiseman with the No. 2 pick in the 2020 NBA Draft. The next year, it held both the No. 7 (from Minnesota) and No. 14 picks and selected Jonathan Kuminga from the GLeague and Moses Moody of Arkansas.

Wiseman impressed at times as a rookie, averaging 11.5 points and 5.8 rebounds per game in 39 games before tearing his meniscus. After a setback while playing for the Warriors’ GLeague team, he missed the entirety of the 2021-22 NBA season.

The young star returned to action in the NBA Summer League and looked pretty impressive in the process.

Even Wiseman seemed impressed with the way he played.

Fans were all-in on the promising young big man.

Both Kuminga and Moody have looked like stars in Summer League action as well.

The Future is so bright 👀 pic.twitter.com/XURPgE9FhH

The Warriors current title hopes ride on superstars like Curry, Thompson and Green. But it appears Bob Myers and Steve Kerr have set up the organization for long-term success as well. And people are taking notice.

It's pretty absurd that the Warriors bench is going to be:

That's like a good start for a rebuilding team and it's the bench for the champs.

A team coming off of a championship season, with their top-six players back and Kuminga, Wiseman, and Moody waiting for some run.

What exactly is their to complain about? Life is good in Warrior land…

Life isn’t just good in Warrior land, it’s great, and it appears it’ll stay that way for a long time.