Here Are The Warriors’ Best Moments From Their Championship Parade, And Draymond Green Is All Over Them 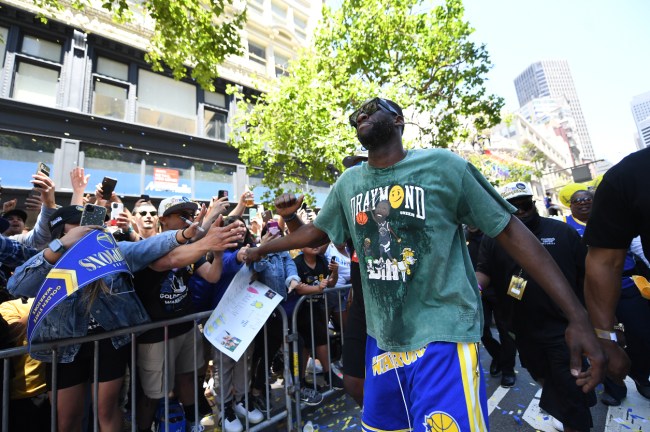 The Golden State Warriors have won a few NBA titles in recent memory. But, this one against the Boston Celtics was different. They were counted out, Klay Thompson came back from a pair of devastating injuries, and Stephen Curry finally achieved his very first NBA Finals MVP.

So, the championship parade on Monday in the Bay Area was everything we expected and more.

In case you missed the parade, here are the best moments, and Draymond Green unsurprisingly took the cake for a lot of them.

Relive The Best Moments From The Warriors Championship Parade

Where do we even begin?

Well, how about BEFORE the actual parade and Klay losing his hat only to replace it with a sailor’s hat.

.@KlayThompson really lost his hat on the way to the parade 🤣 pic.twitter.com/V0GZKCG8oo

Then Draymond Green just went nuts during the parade.

This is how you celebrate a championship 🍾@juanonjuan10 x @Money23Green pic.twitter.com/qvJso3OhZI

In the middle of it, Green even stopped for some ice cream. Hey, win a title, why not treat your cravings also?

Dray got off the bus to get some ice cream 😂 (via @ESPNNBA)pic.twitter.com/Madgp9Moq0

“We drinking Lobos and we telling y’all to shut up.”

Draymond Green is on 10 at the Warriors championship parade 😂 pic.twitter.com/kw2bJBHIT4

Oh, and Klay Thompson basically ran over somebody.

Steph had to drop the mic too.

Jordan Poole had to get his fair share of memorable moments and shot a water gun into the crowd on a beautiful day in Northern California.

Last but certainly not least…Gary Payton II lost his hat, and he didn’t care one bit.

The Warriors had a terrific time, and they definitely deserved every second of it.