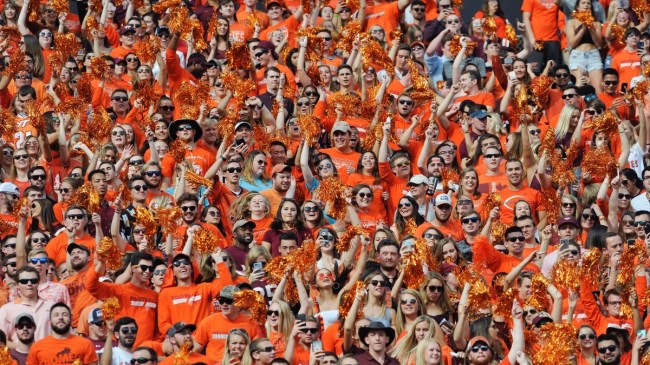 College football is full of great traditions. Whether it’s the Penn State White Out, the Ralphie Run at Colorado, or dozens of others, it’s one of the best parts of the sport. The tradition at Virginia Tech of playing Metallica’s hit, ‘Enter Sandman’ is one of the most famous traditions.

It’s been a few rough years in Blacksburg, and first-year coach Brent Pry has quite the rebuild ahead of him. But, the Hokies have a chance to make a statement against rival West Virginia on Thursday night, and Lane Stadium is rocking.

‘Enter Sandman’ at Virginia Tech is once again going viral.

It’s a sold-out crowd in Lane Stadium to see the Hokies take on West Virginia and Enter Sandman had the crowd rocking.

It is beautiful. Week four of College Football is HERE. WVU vs VT on ESPN. pic.twitter.com/qeUFm0k7FG

Enter Sandman on a Thursday night brings me back to my childhood of Thursday night Big East football. It just seems right and it’s sad the NFL took over Thursdays.

Of course, it’s one of the internet’s favorite traditions.

NCAA Football 24 is arguably the most hyped sports game ever and this person has a great idea for the game.

Since it’s the internet, someone had to say something negative about it.

What exactly is impressive about this? They're playing music over the stadium PA and the crowd is jumping up and down. European soccer fans do this but way better and they make their own music and bring their own fireworks.