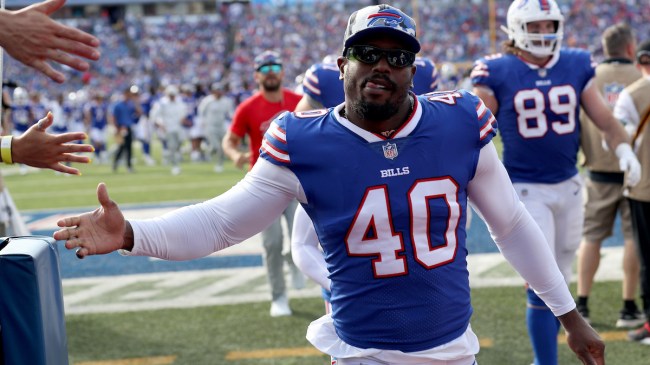 One of the bigger stories coming out of the NFL’s season opener between the Los Angeles Rams and Buffalo Bills surprisingly surrounded Von Miller’s haircut.

The Super Bowl 50 MVP, who moved from the Rams to the Bills this off-season, debuted a rather bizarre haircut on Thursday night. Miller sported a shaved head featuring a triangular patch on the back and it quickly drew the attention of NFL fans across the country.

From theorizing that the Bills linebacker had joined the Illuminati to just straight-up roasting him, fans had a field day. Miller finally gave an explanation for the new hairdo on Monday, revealing a spiritual meaning behind the triangle.

A triangle represents manifestation, enlightenment, revelation, and a higher perspective. It is often used to mark the cycles of growth that lead to a higher state of being. Spiritually, it represents a path towards enlightenment or connection to an omnipresent being.

It appears Miller is doing everything possible to take the Bills to the next level, including sporting a ridiculous haircut. He tweeted a triangle image, perhaps the one he gave to his barber, along with the symbolic meaning behind it.

“A triangle represents manifestation, enlightenment, revelation, and a higher perspective. It is often used to mark cycles of growth that lead to a higher state of being.”

Funny enough, a quick Google search for “symbolism of a triangle” provides a top link to Crystal Clear Intuition, where the word-for-word definition that Miller used can be found. So it’s still unclear how much thought he actually put into all of this.

Energetically, triangles direct energy and power in the direction which they point.

Whether you buy his explanation or not, it seems the haircut worked. Miller recorded two sacks on Matthew Stafford and the Bills limited the Rams to just 10 points. He’s still an elite pass rusher, so who’s to say his haircut isn’t the difference maker?

The Buffalo Bills made NFL history in Week 1.https://t.co/M1gMwUrj8s

Clearly, Von Miller is pulling out all the tricks in the hunt for his third Super Bowl ring. While his explanation may not live up to the wild conspiracy theories that fans had, it’s still pretty comical.

However, on second thought, his explanation honestly sounds like something the Illuminati would preach. So maybe those fans were onto something.