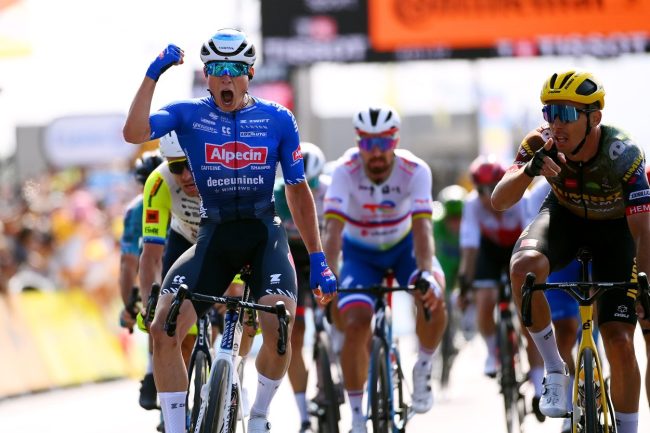 Jasper Philipsen is one of the cycling world’s best sprinters.

Philipsen has won three stages of the Vuelta a Espana, one of cycling’s premier events alongside the Giro d’Italia and, of course, the Tour de France. He entered the 2022 Tour de France as the main sprinter for his team, Alpecin-Deceucninck, and has a great shot at picking up his first ever Tour stage win.

He celebrated just that on Tuesday, pumping his fists and letting out a huge yell as he crossed the line to complete stage four of the Tour. The only problem? He finished second, well behind winner Wout Van Aert of Jumbo-Visma, who broke away from the field with six miles to go and won by a healthy seven seconds.

Cycling Twitter, which is much larger than you’d think, wasn’t going to let it go unnoticed.

Neither was Van Aert’s teammate, Christophe Laporte, who finished third and immediately let Philipsen know about his blunder.

Christophe Laporte pointing out to Jasper Philipsen that Wout was already finished and in the bath by the time they crossed the line pic.twitter.com/PPsmlpsYtn

To be fair to Philipsen, he didn’t see Van Aert ride away on the climb and sprint finishes can be chaotic. Van Aert also did something similar just last month.