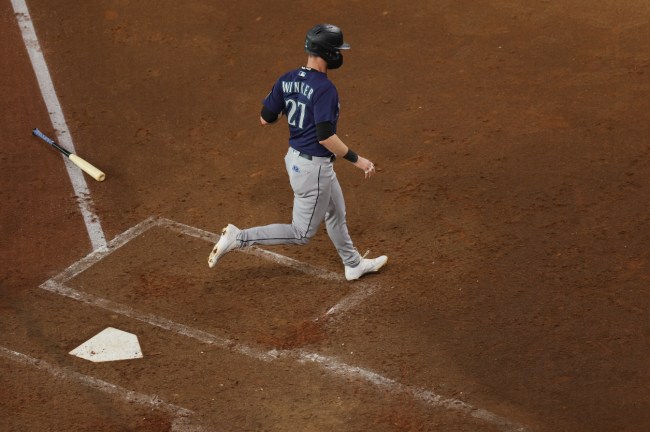 Sunday’s game between the Seattle Mariners and Los Angeles Angels was just a typical game between American League West rivals.

Things got WAY out of hand in the second inning when a pitch hit Jesse Winker. And, safe to say, Winker didn’t think too kindly of it, and it sparked a long, benches-clearing brawl.

This is wild between the two sides, and the Mariners — at least from what it looked like — kept it going for as long as possible.

Tensions were high, and suspensions must be coming — a long list of them.

Jesse Winker And Anthony Rendon Were Not Happy With Each Other

After Winker was tossed from the game and the dust started to settle, he walked off and expressed his displeasure with the fans in Anaheim.

Fights the whole team and flips off the fans. Jesse Winker is a BALL PLAYER pic.twitter.com/Vu0rLkyg8j

Well, that’s going to be a lengthy suspension for Winker, and injured Angels third baseman, Anthony Rendon, shoved him right in the face — which seemed to blow everything else wide open.

Anthony Rendon got Jesse Winker right in the face 😳 pic.twitter.com/RiBLv9QUCr

Then, at the end of it all, Raisel Iglesias tossed an entire box of what looked to be sunflower seeds onto the field in frustration.

As Jeff Passan said, this massive brawl will result in many suspensions.

Quite the brawl between the Angels and Mariners. Anthony Rendon shoving Jesse Winker in the face with his left hand (and with a cast on his right arm!) was a moment. J.P. Crawford over the top with some forearm strikes. There will be suspensions.

Oh, and this was only the second inning.