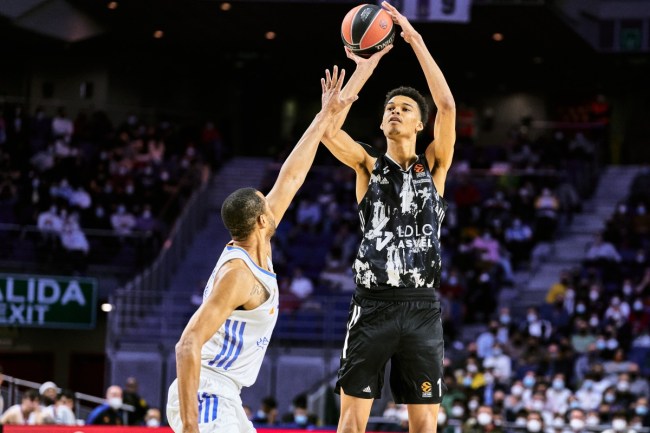 Every once in a while you get a prospect in sports so good, so can’t-miss, that you’re 100% sure they will be a legend. Guys like Lebron James, Peyton Manning, Tiger Woods, and Bryce Harper to name a few have all been billed as legends from a young age. Enter French teenager Victor Wembanyama.

Wembanyama, the 7-foot-3 18-year-old is the next big thing in basketball. And, Tuesday night, he will make his stateside debut when his club Metropolitan 92 plays against G League Ignite in Las Vegas Tuesday.

Wembanyama is someone we have never seen before in basketball.

It’s a bold statement to say we’ve never seen a certain type of player. After all, there are only so many body shapes and types of athleticism a person can have. And yet, Wembanyama is one of a kind.

First off, there’s his unbelievable size.

I’ve never seen someone have to crouch down further to sit in my entire life. That’s a normal-sized chair. He makes it look like a chair you sit in when you have to go to parent-teacher conferences for your 2nd grader.

But, height isn’t everything. After all, Yao Ming was 7-feet-6. Manute Bol and a few others even taller.

Wembanyama can really, really, play. Whatever you’re picturing in your head about what this highlight tape is going to be, this will exceed your expectations.

Have you seen a basketball player like this? No, you haven’t.

The memes have already started.

If you couldn’t comprehend just how big Victor Wembanyama’s wingspan is here’s him outside the AT&T center pic.twitter.com/Gkdj4rSlqT

In all seriousness, his wingspan has been measured at eight feet.

You can watch him play Tuesday night at 10PM ET on ESPN2.

Wembanyama is eligible for the 2023 NBA draft.