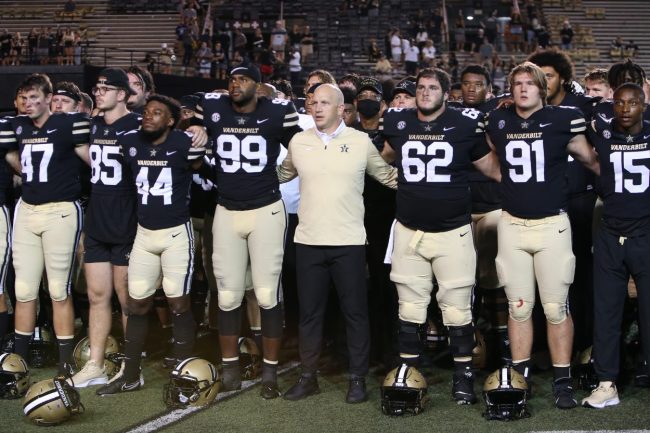 Clark Lea has his work cut out for him. The second-year Vanderbilt football coach took over a program that won a combined three games in 2019 and 2020. The Commodores are historically one of the worst Power 5 programs in college football and the SEC.

But Vandy grad isn’t getting discouraged. After spending three years as Brian Kelly’s defensive coordinator at Notre Dame, Lea took over in 2021 and led the ‘Dores to a 2-10 record. That didn’t stop him from having supreme confidence about his program at SEC Media Day on Tuesday. Some might even say too much confidence.

“We know in time Vanderbilt football will be the best program in the country.”

Look, every coach in the country should have the same attitude of Lea. It’s normal to set the bar high for your program. But Lea thinks he’s going to turn Vanderbilt into the country’s best program, and we’re not going to be the ones to tell him that ain’t happening. Fans on Twitter, however, are another story.

Confident pigs will fly before this happens https://t.co/gFNFu6fWGf

I like the confidence l, but this ain’t it https://t.co/lIhNPXmDRE

That time won’t be seen by anybody alive right now https://t.co/xF8AnvyO5Q

Vanderbilt hit a high water mark in 2012 and 2013 with a pair of nine-win seasons under James Franklin. The Commodores have played football since 1902. They have a grand total of zero 10-win seasons. Vanderbilt becoming the best program in the country would surely be some sort of sign of the end of the world.

On the other hand, Vandy competes in a conference with reigning national champion Georgia. Oh, and there’s the matter of Nick Saban and Alabama. The Crimson Tide have won six national championships in the last 12 years. Again, we admire Lea’s ambition. But it’s just not going to happen.