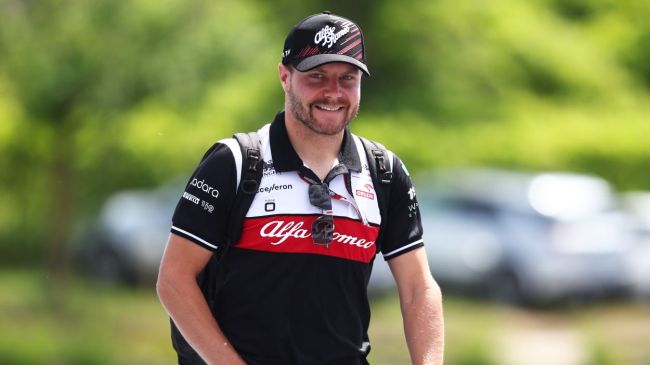 Free of the shackles and expectations that come with being Lewis Hamilton’s teammate at Mercedes, Bottas is having a resurgence of form in 2022.

But that’s not why he seems to be making news almost every week. No, that’s because of what the Finnish driver is doing off the track.

Bottas first made headlines after the inaugural Miami Grand Prix. He remained in the US to vacation in Colorado and apparently decided to do some skinny dipping along the way. This was all documented by his personal photographer and a picture of the driver lying naked, butt up in a Colorado steam began to make the rounds on the internet.

Following the viral photo, Bottas opted to make and sell prints of picture to raise money for charity. He ended up selling over 5,000 copies and raising over $50,000.

And in hilarious fashion, Bottas even gifted one of the prints to his former teammate and seven-time F1 world champion Hamilton.

I don’t know whether Bottas is aware that streams are home to snakes and bugs and many other dangerous aquatic life. But it hasn’t seemed to phase him.

Instead, Bottas is back at it, bare-bottomed in the middle of nature.

The latest photos are courtesy of Bottas’ girlfriend, professional cyclist Tiffany Cromwell, who posted them on her Instagram story. The couple are celebrating Midsummer in Bottas’ native Finland during the F1 off week.

There’s no indication Bottas will sell these latest pictures as charity prints. But there’s also no indication that the F1 star will stop showing booty on the internet anytime soon.