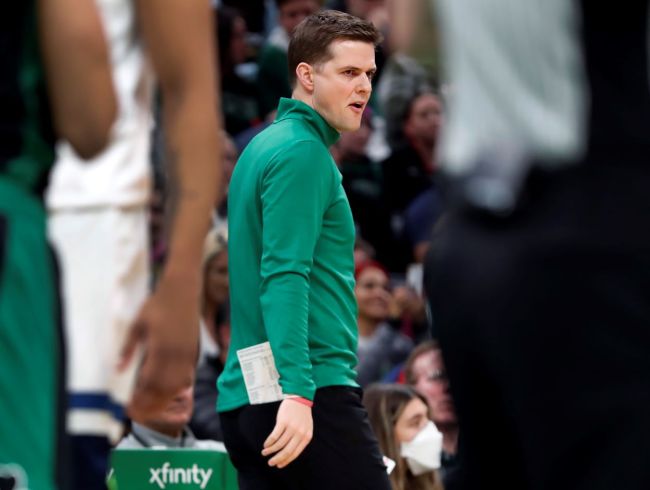 Welcome to the big leagues, Will Hardy.

Who is Will Hard? Good question! That’s probably the same question a number of NBA fans have asked over the last hour or so.

If reports are to believed, Hardy is the next head coach of the Utah Jazz.

Will Hardy and the Jazz are finalizing a five-year contract to make him the franchise's next coach, sources tell ESPN. Hardy, 34, will be the youngest active coach in the NBA. https://t.co/uISUNbadGJ

The Jazz fired previous coach Quin Snyder following another early playoff exit in his eighth year with the team.

Hardy spent this past year as a Boston Celtics assistant under Ime Udoka. Prior to that he spent eight seasons under Gregg Popovich with the San Antonio Spurs, including the final four seasons as an assistant coach.

Should the Hardy hire go through, he would become the youngest active NBA coach at 34 years old, three years young than Memphis Grizzlies coach Taylor Jenkins.

Fans across the league seems split on the hire. Celtics fans seemed sad to see him go. While Jazz fans weren’t sure if the move means the team is rebuilding or just looking to integrate new blood.

Significant loss for the #Celtics coaching staff. But Will Hardy has certainly paid his dues. https://t.co/j21iSKyvLn

Youngest NBA coach taking the reins of a contending team? Nah. This feels like a rebuild move. Blow it up @utahjazz https://t.co/DVUwV1Plvf

Bro younger than half the roster lmao let’s get this rebuild started already https://t.co/QqJjZCmLar

Jazz with another incredible hire. Hardy is going to be one of the game's best coaches ever. Truly believe that. https://t.co/5f6dVksxWA

Call me ageist, but I love the hire. I know nothing about Will Hardy, but the base rate is that a retread is almost never the way to go. https://t.co/oK5QuxP3mi