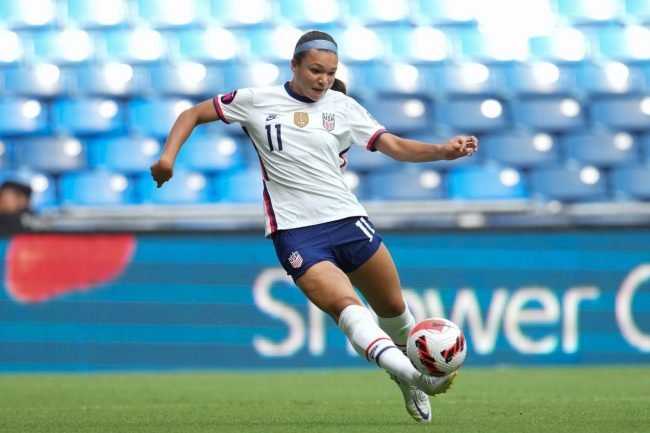 Sophia Smith is on the verge of absolute superstardom.

You may not know the name now, but you’ll want to learn it ASAP. The 21-year-old helped lead Stanford to an NCAA Championship in 2019 and was the first overall pick of the 2020 National Women’s Soccer League Draft by the Portland Thorns.

Smith has absolutely hit the ground running in the NWSL. After scoring seven goals in 22 matches in her rookie season, she already has eight in nine matches this year. That’s good enough for second-best in the league behind superstar Alex Morgan of the San Diego Wave, who has 11. Though Morgan takes penalty kicks for her team and Smith does not.

The young star is also doing it for the US Women’s National Team. She’s scored eight goals in 18 senior national team appearances, and she scored the best one yet in a 5-0 win over Jamaica on Thursday night.

The first of the evening for @sophsssmith ☝️

It begins with center back Naomi Girma spraying an absolutely ridiculous ball out to Smith on the right wing. Smith’s first touch takes her to the edge of the penalty area before an absolutely savage second touch to spin the Jamaican defender, What happens next is a thing of absolute beauty. Smith lets the ball bounce and rather than striking the ball with her left foot, takes it on the half-volley with the outside of her right foot and bends the ball past the goalkeeper. It’s an absolute work of art and the Jamaican goalkeeper was beaten before she knew there was a shot coming.

Soccer fans were in awe of the strike.

This should be @ussoccer goal of the year.

There might be a goal in Qatar more significant, but it won’t be of better quality https://t.co/nid9xkQAvb

This was absolutely ridiculous. My goodness @sophsssmith https://t.co/RJtOZOP5tQ

This is world class. https://t.co/hyHuTri72P

Hang this in the Louvre! https://t.co/NUw2Nrl27P

The cheek to even try this. The technique to pull it off. Just an absolute peach of a goal and perhaps the best you’ll see all year. The goal helped secure a 5-0 victory and qualification into the 2023 FIFA Women’s World Cup.