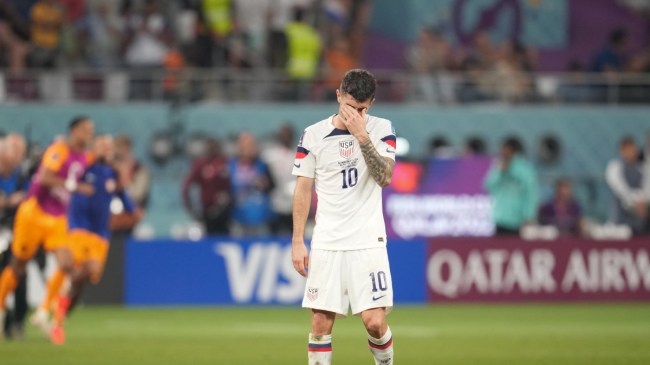 After three exciting group games that saw the USMNT get through the group undefeated, their run at the 2022 FIFA World Cup has come to an end. Netherlands beat our soccer lads, 3-1, Saturday morning in Qatar. It ends this campaign as they look towards the 2026 edition, which will be held in the USA, Mexico, and Canada.

The USMNT had their chances and just couldn’t convert. They actually won the expected goals (xG) battle, 1.89 to 1.85.

Early on, Christian Pulisic had a golden chance for the Americans.

What a CHANCE for the @USMNT! 😱

The USMNT is knocking early against the Netherlands pic.twitter.com/PMuZwBYJuM

But, he didn’t score, and the Dutch scored two goals in the first half to go up, 2-0.

The Netherlands make it two!

In the final seconds of the first half, Daley Blind makes it 2-0 🇳🇱 pic.twitter.com/pZThbgnKUK

In the 2nd half, the Americans got one back off of a wild goal from substitute Haji Wright.

Haji Wright scores to get the USMNT on the board vs. the Netherlands.

But, the Dutch crushed dreams when they went up 3-1, late in the game.

The Netherlands scores a third!

Netherlands now leads the USMNT 3-1 late in the second half pic.twitter.com/HsmcVco9V2

It finished at that score. Netherlands advances to the quarterfinals.

It’s never good when your team gets knocked out of the World Cup. But, this is a very young United States team and the goal all along was to get out of the group stage. They did that successfully.

And, some familiar figures had a lot to say.

I’ll leave the real analysis to those who haven’t watched soccer for 4 years but need to sound smart. I will say I’m proud of the #USMNT. They gave us some fun moments. Also, congrats to the Dutch. As a token of our gratitude we’ll be sending you Kanye.

So proud of the boys the World Cup 🇺🇸 #USMNT 2026 is going to be LITTY!

2026 is going to be amazing. So much to build on. Onwards and upwards!!!!! @USMNT 🇺🇸🇺🇸🇺🇸🇺🇸

Let’s hope the Americans can win the World Cup in four years.