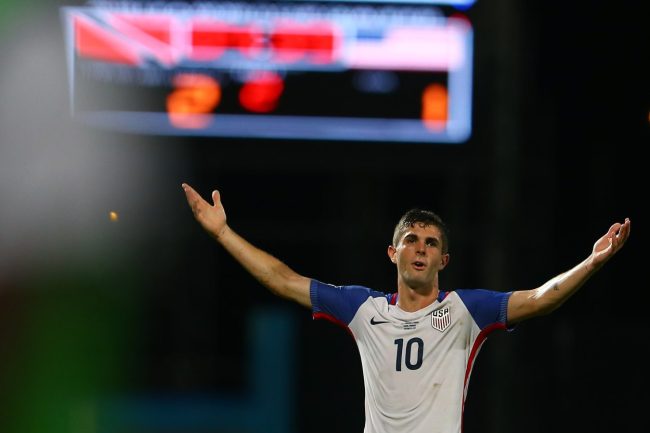 After what seems like an eternity, the United States men’s national team is heading back to the FIFA World Cup in November.

The US failed to qualify in an embarrassing 2018 campaign, but backed by an immensely talented young core of Christian Pulisic, Gio Reyna, Tyler Adams, Weston McKennie and Brendan Aaronson, the Yanks head to Qatar with some high expectations.

Of course, part of the fun of qualifying for the World Cup is seeing the new jerseys the team usually gets. Recently, Nike has come under fire for kit (jersey) templates that they used for each of their teams across the world. They’ve since done away with that concept. But if the leaked USMNT jerseys that hit Twitter on Monday are any indication, maybe they should go back to.

A fan just DMd me these pictures of the 2022 USMNT World Cup kit. pic.twitter.com/u7nDwp6iXB

On the left, you have the reported home jersey. On the right is the away. MLS and USMNT sideline reported Michele Giannone seemed to confirm that the leaks were accurate.

The home jersey looks very similar, albeit with different color blocking, to the away jerseys worn by Nike club team Tottenham Hotspur. While the away jersey resembles those fashioned by Jordan Brand for Paris Saint-Germain a few years ago.

Nike MUST be destroyed. they will pay for their crimes #USMNT https://t.co/OHGuD2yvBu

As a fan of simple white jerseys, I’d love to say I like the home uniforms. But the shoulder color blocking is odd and the crest in the center of the shirt just makes players look like a shoddy ironman ripoff. The away jerseys are fine, but don’t do much to indicate it’s a USA jersey.

Whatever happened to "if it ain't broke, don't fix it?" https://t.co/FdygJYeaTd

If the team wins, nobody will care what the uniforms look like. But it’s not an auspicious start to the campaign in Qatar.