REPORT: College Football Could Be Turned On Its Head As USC And UCLA Are Set To Join The Big Ten 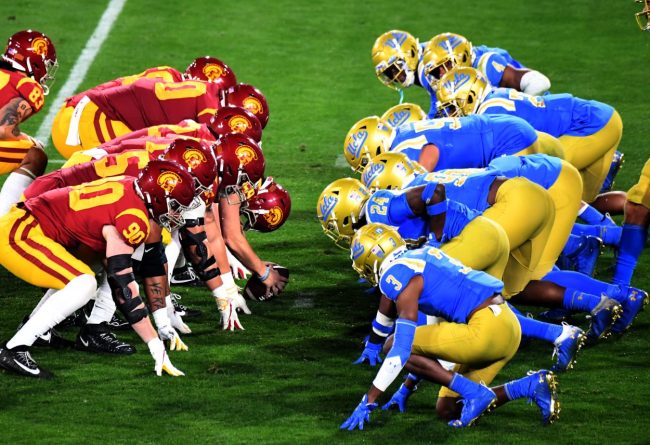 Conference realignment has been the talk of the town for a number of years in college football. Texas and Oklahoma dropped a gigantic bomb on the college sports world when they agreed to leave the Big 12 for the SEC just last summer.

Now it’s the Big Ten’s turn to get in on the fun.

Source: USC and UCLA are planning to leave for the Big Ten as early as 2024. Move *has not been finalized* at the highest levels of power.

Pac-12 reporter Jon Wilner dropped an absolute nuke on the college sports world on Thursday afternoon when he reported that conference powerhouses USC and UCLA are planning to leave the conference and join the Big Ten.

The news shook through Twitter with fans and reporters alike having a lot to say.

SC and UCLA pulling up on the Big Ten https://t.co/uN9FwtCjcC pic.twitter.com/MWBKGEq34C

My god, if this actually happens it means my chances of getting a bar in LA to put the TV on Big Ten Network will go from 0% to 0.1% https://t.co/w8IK9KWtv7

A number of reporters quickly confirmed Wilner’s report as well.

I’ve confirmed that this is accurate. USC and UCLA are pursuing Big 10 membership, per sources. I wouldn’t rule out future expansion of Big 10 either. https://t.co/lwjhNWp4Ts

Source tells me that there is a lot of truth to @wilnerhotline report about USC and UCLA in discussions to leave for the Big Ten. My understanding is USC and UCLA reached out to the Big Ten.. certain legal parameters and bylaws need to be followed for obviously legal reasons. https://t.co/2NSDv8YtWA

USC and UCLA represented perhaps the Pac-12s two biggest brands and the move would be potentially crippling for the conference long-term.

And according to Nicole Auerbach of The Athletic, this may not be the last of the moves.

Just got off the phone with someone who believes this eventually leads to two megaconferences — the Big Ten and SEC — with 20 or more members apiece.

Pac-12 standouts Oregon and Washington are already popping up as teams that could follow USC and UCLA. While the ACC appears ripe for the picking by both the Big Ten and SEC.

When Lincoln Riley left Oklahoma for USC in the offseason, fans saw it as shrewd career move. The Sooners are about to be thrust into the country’s deepest conference and USC was in a position to take advantage of a struggling Pac-12 conference. Now that may no longer be the case, and fans are loving it.

So Lincoln Riley choose to run to pac 12 to have an easier path to the playoff . Now they are joining big 10. How long is he staying @OSUFAN4U2NV @httrhao https://t.co/7qNhtKdVKq pic.twitter.com/YwVDeCnKtL

Lincoln Riley: "I believe Cal can be the mecca of college football." https://t.co/F3GSEQJE3E

FOX Sports reporter Bruce Feldman indicates that the USC and UCLA deals are far from being a done deal. But both schools want out and the Big Ten appears happy to have them.

Buckle up, college football fans. Things about to get bumpy yet again.