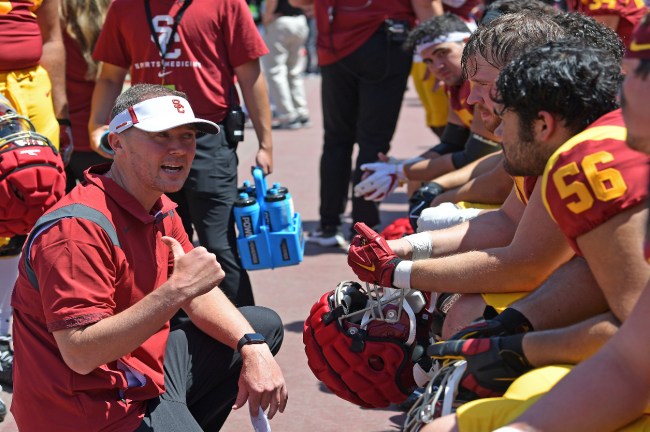 The USC Trojans won four games last season, fired Clay Helton, and watched both quarterbacks leave in the transfer portal. Usually, that means a recipe for disaster for the following season.

But, that’s not the case this time. The Trojans shocked the world by hiring Oklahoma Sooners head coach Lincoln Riley. Then, they landed Sooners QB Caleb Williams, Oregon RB Travis Dye, and Pittsburgh WR Jordan Addison. There are a lot of other new faces around Heritage Hall, and the hype is certainly justified.

According to David Purdum of ESPN, a ton of bettors are throwing money on the USC Trojans to make the College Football Playoff.

A pair of perennial powerhouses in Alabama and Ohio State are attracting the bulk of the betting action around the nation, but the story is a little different at one Las Vegas sportsbook, where more money has been bet on USC to win the College Football Playoff than any other team…USC has attracted more bets and more money to win the national title than any other team at the Las Vegas location for the SuperBook.

For some reason, the Trojans are getting some serious consideration. It shouldn’t be surprising, either, especially with all of the talent they have brought in after a four-win campaign.

Can USC hang around with Alabama, Georgia, and Ohio State? Who knows. But, the USC hype is back after years of mediocrity, and bettors are hoping to cash in. We can only imagine what happens once the Trojans head to the Big Ten.