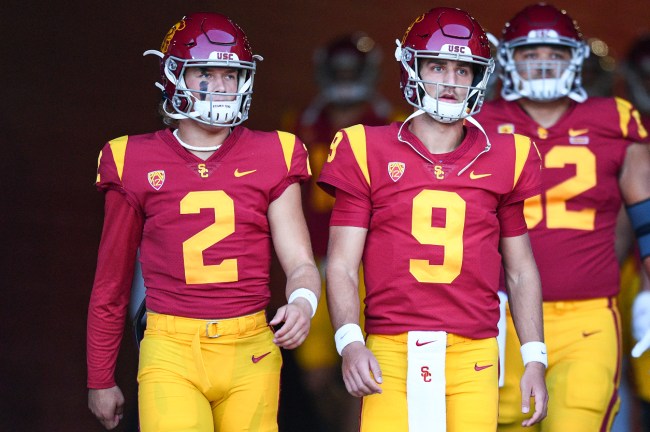 The newest Heisman Trophy odds have dropped with the 2022 college football season just a few weeks away. Of course, reigning champion Bryce Young and runner-up CJ Stroud are on top of the list. USC Trojans QB and former Oklahoma Sooner Caleb Williams — who wowed everybody with an unreal throw — is also pretty high on the list.

However, there is a surprising statistic when we see all of the candidates. Somehow, FOUR former or present USC quarterbacks have cracked the top-12 odds: JT Daniels, Kedon Slovis, Jaxson Dart, and Caleb Williams.

That’s right, three former Trojans on this list and Caleb Williams, the new signal-caller, in the top three.

The most surprising might be Dart, who isn’t guaranteed to start the season at QB for the Rebels. But, if you watched Dart last year, you understand why there is a ton of hype around him.

Coastal Carolina QB Grayson McCall not being on this list is another surprise, but as we all know, a lot can change over the next few months. Still, this is unreal to see so many former USC quarterbacks on this list, especially since the Trojans have been mediocre in the past few years.

Times sure are different.