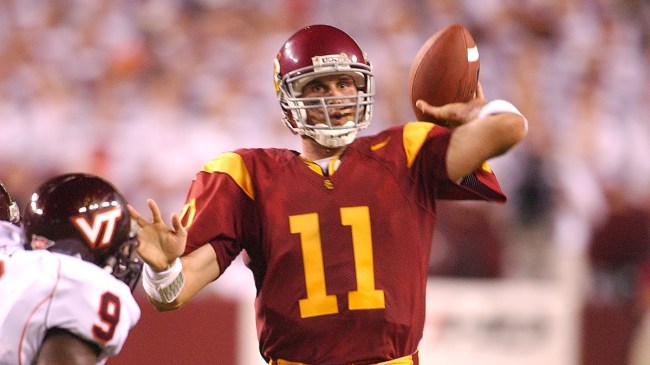 Matt Leinart is one of the best college quarterbacks of all time. The USC Trojan threw for over 10,000 yards and 99 touchdowns in his career and won the Heisman Trophy in 2004. He led the Men of Troy to an AP national title in 2003 and a BCS title in 2004 and famously lost to Texas in the best college football game ever, 41-38.

You’d think the current Fox Sports Analyst would be a rock star on USC’s campus as one of their greatest, if not the greatest, players ever there. Well, that’s not the case.

USC students simply did not know who Matt Leinart was

Decided to see if the kids at @USC still know a thing or two about #11… spoiler alert, turns out I’m old!@USC_Athletics @uscfb pic.twitter.com/he6dfBBGen

Yikes. What a bad look for USC students. If a Penn State legend like Michael Robinson from that time period walked around campus they would be swarmed. That goes for nearly every blue-blood school across the country. Leinart is one of the best players in college football history and they treated him like he was some adjunct professor teaching freshman composition.

On another note, give Reggie Bush back his Heisman.

Hard to believe everything that happened with the team is now legal including the push. Time to give Reggie his Heisman back please @NCAAFootball

They should recreate this video with Caleb Williams and see how many Trojan students recognize him.

The Trojans are 5-0, ranked #6, and play Washington State Saturday.