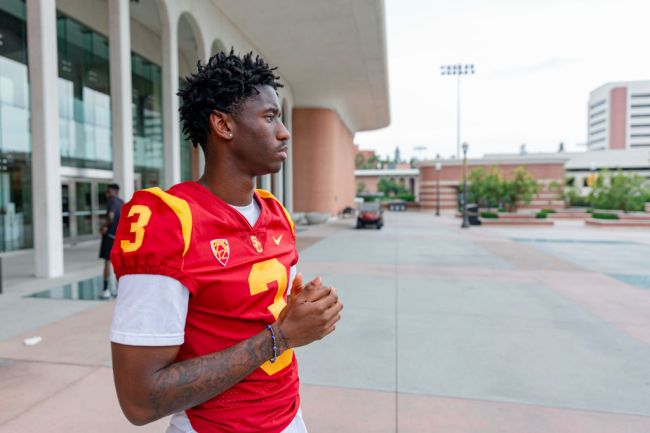 USC transfer wide receiver Jordan Addison made waves in the college football world when he joined the Trojans back in May.

The former Pittsburgh Panther was the nation’s top receiver with 100 receptions for 1,539 yards and 17 touchdowns last season. With major NIL deals floating in, the 2021 Biletnikoff Award winner was a hot commodity in the transfer portal before eventually joining the SoCal football powerhouse.

Even after joining the USC Trojans, Addison continued making headlines by revealing that he’d be wearing Carson Palmer’s retired No. 3 jersey.

Addison has shown immense respect for the 2002 Heismann winner, whose permission he needed in the first place. However, his reason for wearing the No. 3 actually lies with another player, Calvin Ridley.

Ridley wore the No. 3 during his time at Alabama, where his junior season was the year Addison entered high school. The USC transfer even credits the Falcons WR as the major reason for why he started playing the position, hence his decision to rock the same number.

While Ridley may be his main reason for picking No. 3, Addison very much respects Palmer’s legacy as a Trojan. He even checked out the former quarterback’s college tape before their call. In short, he feels incredibly humbled.

“He told me that he didn’t wanna just give his number to anybody. He wanted to make sure I was the right fit character-wise,” Addison revealed. “It really means a lot to be wearing the number that a Heisman Trophy winner wore when he played here. So I just feel like it’s just gonna bring a lotta good luck to me and to the university.”

Jordan Addison has big shoes to fill once he steps into the Coliseum, but if there’s anyone who’s up to the task, it’s him. With new head coach Lincoln Riley and new quarterback Caleb Williams also joining the ranks this offseason, expectations are at an all-time high for the Trojans.

As USC prepares to leave the Pac-12 in 2024, they’ll hope to finish on a high note. Addison hopes to make Palmer and the rest of the Trojan family proud, so it’s truly shaping up to be a great year.