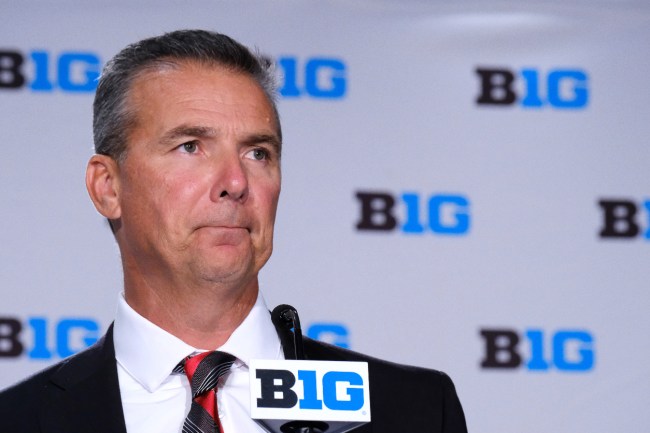 The most significant bombshell report in a long time dropped on Thursday morning. Jon Wilner of The Mercury News reported that USC and UCLA were headed to the Big Ten as early as 2024, and the deal was sealed and delivered hours later.

The college football world exploded with these reports, and some fans quickly torched new Trojans head coach Lincoln Riley, who recently moved from the Big 12 to the Pac-12 and now will head to the Big Ten in a couple of seasons.

This seismic shift has been a major talking point and will be for quite some time.

One supporter of this move is former Ohio State head coach Urban Meyer, who spoke with the Big Ten Network in great detail.

Some conference realignment doesn't make a lot of sense. @UCLAAthletics and @USC_Athletics to the @bigten is not an example of that.@CoachUrbanMeyer tells @BTNDaveRevsine why he loves the additions ⬇️ . pic.twitter.com/rSE9B4BfGH

Meyer spent years with the Buckeyes and then headed for the NFL in a stunning move, an experiment that was a disastrous one for both parties.

However, Paul Finebaum is not thrilled at all with this move and compared it to Wall Street (h/t Sam Gillenwater of ON3).

“What we have is just a battle of the two behemoths and that’s the SEC and the Big Ten. This is similar to what’s going on Wall Street between the biggest companies vying for your dollar. That’s what this is about. This is about money. Pure and simple,” said Finebaum. “Don’t let any college commissioner or president tell you otherwise. They’re a greedy bunch. That’s what they care about and the students who happen to play athletics are the pawn in this big prize.”

Both sides bring up very valid points, and the amount of money for USC and UCLA is expected to be enormous, and even John U. Bacon said this is all about money.

"This is a straight money grab." @johnubacon on USC and UCLA joining the Big Ten pic.twitter.com/5YE72qz2qX

As Wilner reported, USC and UCLA could TOP $100 million annually, so for these programs to make the move makes absolute sense from a financial perspective.

Oh, and the thought of USC facing Ohio State and Michigan every season is glorious, at least for college football fans.

This will continue to be a hot topic for a long time, especially with reports of Notre Dame considering a move to the Big Ten as well.