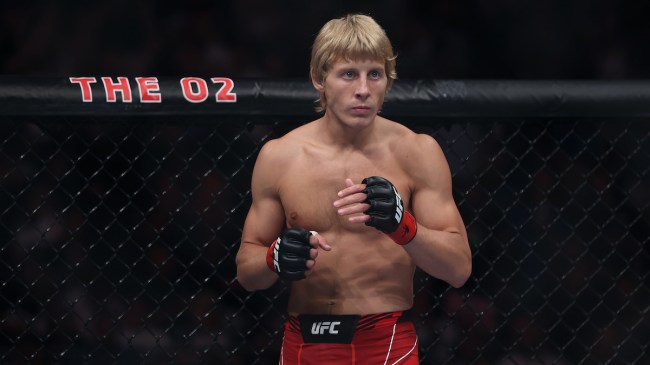 Paddy Pimblett might be in the co-main event for UFC 282 on Dec. 10th, but that isn’t stopping him from stepping into the ring against Jake Paul.

Earlier this week, the rising UFC star shared his thoughts on Paul and the whole YouTube boxing scene on an episode of Pub Talk. While he gave the YouTuber-turned-boxer credit for his dedication to the sport, Pimblett still thought Paul’s fights were rigged. Specifically, he had suspicions about the most recent bout against Anderson Silva.

On Tuesday, Paul fired back at Pimblett’s accusations in a video posted to Twitter and challenged him to a sparring session. Of course, there was something extra on the line.

He offered Pimblett $1 million if the UFC fighter could defeat him in five 3-minute rounds of boxing. But should Paul win, he wants Pimblett to join his United Fighters Association and help recruit UK fighters.

Dear Paddy Pimblett, you claim my fights are rigged? Stop calling the GOAT Anderson Silva a criminal and come spar me.

You win, I give you $1 million. I win, you join the UFA. pic.twitter.com/jOFqcPdjnz

Paul actually offered a similar bet to Silva ahead of their boxing match back in October, which led to the creation of the UFA to improve fighter pay and healthcare. It appears he’s intent on adding another UFC fighter to the union and even offered to fly Pimblett to Puerto Rico via private jet to make it happen.

Pimblett revealed that he was all for Paul’s offer during an interview with TMZ Sports later in the day. However, he countered with an alternative location due to his existing contractual obligations to the UFC.

“As if he does not know I’m fighting next week and he’s like ‘I’ll fly you to Puerto Rico.’ Come to the PI next week. Come to the [UFC Performance Institute] next week and bring $1 million in a bag and I will spar with you,” Pimblett said.

‘The Baddy’ is set to face off against Jared Gordon for the UFC 282 co-main event in Las Vegas. So a trip to Puerto Rico a week before the fight isn’t exactly practical. That said, he is still very much interested in sparring with Paul. It just has to happen in Vegas instead.

“I’m in the PI in Vegas on Thursday. I land on Thursday, so even though I’m low on calories and I’m only about 170, he likes picking on smaller people anyway,” he continued. “But if he wants to wait until after my fight, until the Monday, because I’m still in Vegas ’til the Tuesday, but I’m about 185, 190 pounds. I’m game!”

The ball is in Paul’s court for what happens next. But if he’s serious about this sparring session and bet, then he should have no problems taking the trip to Vegas.