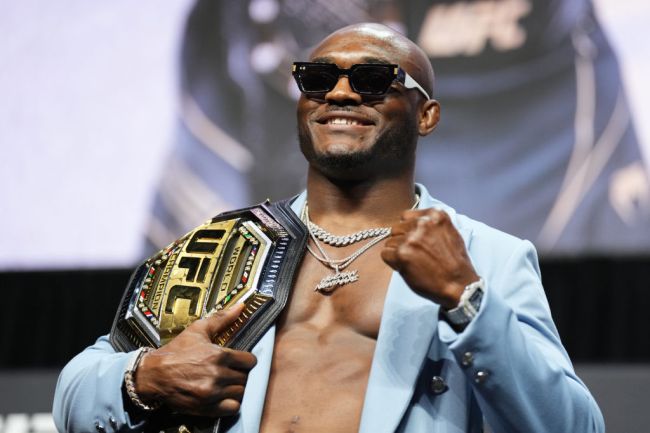 UFC welterweight champion Kamaru Usman has once again expressed interest in stepping outside the Octagon and inside the boxing ring. But the No. 1 pound-for-pound fighter only has one opponent in mind—Canelo Alvarez.

The “Nigerian Nightmare” is a force to be reckoned with and will look for his sixth title defense against Leon Edwards at UFC 278. As the top-ranked pound-for-pound fighter, Usman is confident in his ability to take on anyone and that includes boxers.

While joining the “I Am Athlete” podcast, Usman was asked about the possibility of fighting either Jake Paul or Canelo Alvarez in a boxing match. Both would result in massive paydays, but Usman is only considering one of the opponents seriously.

It appears a bout with “The Problem Child” just isn’t worth the risk. Undisputed super middleweight champion Canelo Alvarez is a much different story though.

Stepping into the ring is a gamble for Usman, no matter who his opponent is. So it’s a risk versus reward analysis that puts Canelo ahead of Paul. Should he decide to follow through, it’ll be for the better reward even if it means facing a tougher opponent.

“Me fighting Jake Paul, I’m helping him. I beat Jake Paul, nobody cares. You’re supposed to beat him,” Usman shared. “I beat Canelo, the biggest athlete in the world, not even close, 100 million in the bank. If I’m gonna gamble, I’m gonna gamble well.”

The UFC already pays the welterweight champion handsomely, so there’s not a whole lot more the Jake Paul fight can offer him. When asked further whether fighting Paul would be a gamble, Usman kept it real.

“Absolutely. Listen, me and him get in a scrap right now, he could touch me. I’m not naive or ignorant enough to think—let them put it on the news,” Usman responded. “I’m a realist. I know I’m gonna dog walk him, but at the same time, everyone has a puncher’s chance.”

The fight to end all influencer boxing fights is coming.https://t.co/Qii6jNY7IM

Many fans expected Tyron Woodley to emerge victorious over Paul, but the reverse happened twice. Who knows what could happen in the ring, so Usman’s point remains valid. That’s not to say he doesn’t believe he would handily win that fight though.