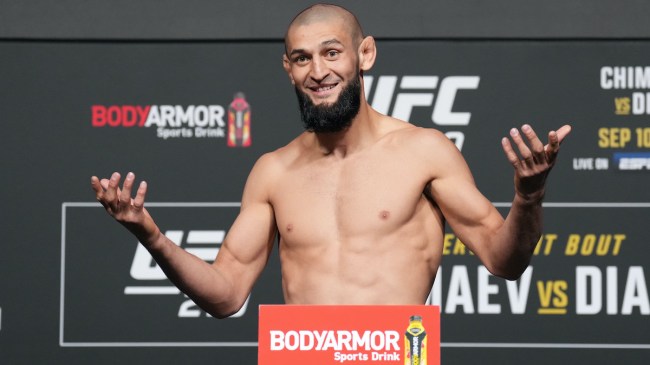 The drama continues to unfold just a day before UFC 279 and Khamzat Chimaev is once again at the center of all the issues.

During Thursday’s pre-fight press conference, a brawl broke out backstage involving Nate Diaz, Khamzat Chimaev, and Kevin Holland. The resulting chaos forced Dana White into an unprecedented move by canceling a presser for the first time in UFC history.

Then it got worse at weigh-ins on Friday with the entire event up in the air. Early reports speculated that Chimaev would miss weight by a shocking 8-10 lbs. Then it was confirmed as he stepped onto the scale weighing 178.5 lbs, which was 7.5 lbs over the limit.

Khamzat Chimaev steps on the scale at 178.5 pounds, missing weight ahead of his #UFC279 main event bout. pic.twitter.com/uSbqRUVH83

After already dealing with a huge mess during yesterday’s press conference, this recent update just keeps getting worse for the UFC. Diaz’s contract is reportedly up in October, so rescheduling the fight against Chimaev isn’t realistic.

Not to mention, it’s the second time Chimaev has disrupted UFC 279 events in the last week. That won’t please the promotion and there’s likely to be a conversation about his professionalism after everything settles.

With Chimaev nowhere close to making the 171 lb weight limit for the main event against Diaz, the UFC was left scrambling to find a last-minute replacement. Despite several fighters throwing their hat into the ring to take on Diaz, it appears he and the UFC are leaning toward Tony Ferguson to step in.

Another source inside Diaz’s camp has told me the “Khamzat fight is officially OFF.” They add Diaz and the UFC are currently negotiating to fight a new unnamed opponent, with Ferguson likely the lead front runner for that. But there’s a chance he doesn’t fight at all. #UFC279

Ferguson, who was originally scheduled to fight Li Jingliang in the UFC 279 co-main event, weighed in at 171 lbs. It happens to be the same weight as Diaz, so the matchup makes sense.

While nothing is confirmed, rumors also suggest the UFC is attempting to rework Khamzat Chimaev vs. Kevin Holland into the co-main event. The potential is certainly there given the two engaged in a physical altercation just a day earlier.

Holland was scheduled for a 180-pound catchweight bout, so Chimaev’s weight wouldn’t be an issue. The remaining dominos would likely fall into place with Daniel Rodriguez, who was set to face Holland, now fighting Li Jingliang, who was Ferguson’s initial opponent.

Diaz currently holds a majority of the leverage with time running out on his UFC contract. He could decide not to fight altogether, although it appears negotiations are underway with Ferguson’s camp.

One speed bump in the Diaz-Ferguson negotiations is the amount of rounds. Diaz’s team wants it to be five, Ferguson was preparing for three. Diaz’s camp tell me they don’t think it will be a problem. However, UFC exploring many different options. #UFC279

UFC 279 was already a tough sell without a title fight. Now the rumored headline fighters are both coming off losing streaks, but that’s the best the UFC can do at this moment.

Fans won’t get the Diaz vs. Chimaev matchup they were expecting, but Diaz vs. Ferguson isn’t a bad alternative. Even the former interim UFC lightweight champion seemed to enjoy watching the drama unfold.

With how the week has gone so far, the UFC will hope the weekend goes smoothly from here on out.