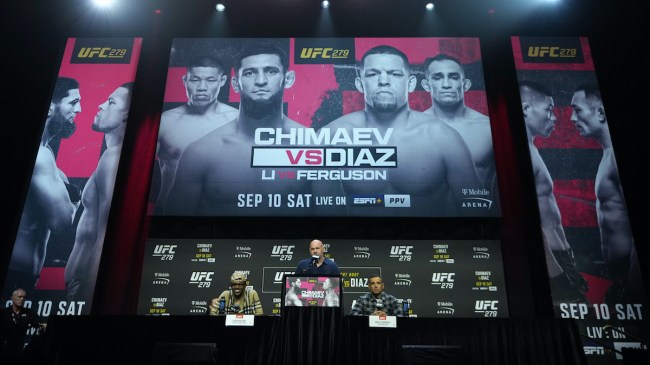 UFC 279 is scheduled for Saturday night, but things got chippy during Thursday’s pre-fight press conference. So much so that Dana White canceled a presser for the first time in UFC history.

Before the event could even start, White announced a new format for the presser. He planned to bring out fighters in pairs after a “big sh*t show” broke out backstage. But he refused to elaborate on why beyond stating “crazy sh*t” happened.

Shortly thereafter, the UFC president canceled the press conference altogether. White apologized for the unprecedented move, but claimed that “for everybody’s safety this was the right decision.”

See you tomorrow for weigh-ins! pic.twitter.com/mxf9f9L5hJ

According to MMA insider Ariel Helwani, the whole situation began initially with Khamzat Chimaev and Kevin Holland. Despite not even being each other’s opponents for UFC 279, the two welterweights engaged in a heated altercation backstage.

Total chaos, I’m told. Not enough security. Fighters too close. Could have been much worse but it got out of hand quick between multiple camps.

Sources told Helwani that kicks, punches, and even water bottles were thrown in the chaos. It seems Chimaev hadn’t taken kindly to previous statements made by Holland.

Given just how much of a “sh*t show” things were revealed to be, it’s honestly surprising more damage wasn’t done.

Khamzat Chimaev push kicked Holland in the chest. Chimaev was reacting to things Holland has said recently and it set him off, I’m told. Once that was broken up the Chimaev-Diaz part of the story popped off and then the bottles started flying. https://t.co/WGpbskiQz7

“Tiki Ghosn, who is a long-time MMA fighter now turned MMA manager, happened to be back there and got inbetween them. [He] broke it up and was actually the guy. There was hardly any security. Few police officers, but way too many people. Way too many team members and fiery fighters.”

Nate Diaz and his crew pulled up backstage once the original altercation had settled down and the chaos erupted once again. They were apparently upset to see Ghosn, who they go way back with, standing near Chimaev, who faces Diaz in the UFC 279 main event.

It seems Diaz, or his camp, actually tried following through on his claims of fighting anybody. Luckily, no one was seriously injured through it all. Once all parties were separated again, the press conference was officially canceled.

Holland, who is notorious for trash-talking, responded to the reports with a single clarification.

That’s weird I didn’t feel a thing 🤷🏿‍♂️@UFCStatsBot please update this as a failed attempt via Chimaev. https://t.co/mjX8Koqaak

UFC 279 goes down on September 10th with Chimaev vs. Diaz and Holland vs. Rodriguez both featured on the main card.

After Thursday’s press conference, this highly anticipated night of fights just got even more exciting. Fans will need to tune in on Saturday to see if any more chaos breaks out.