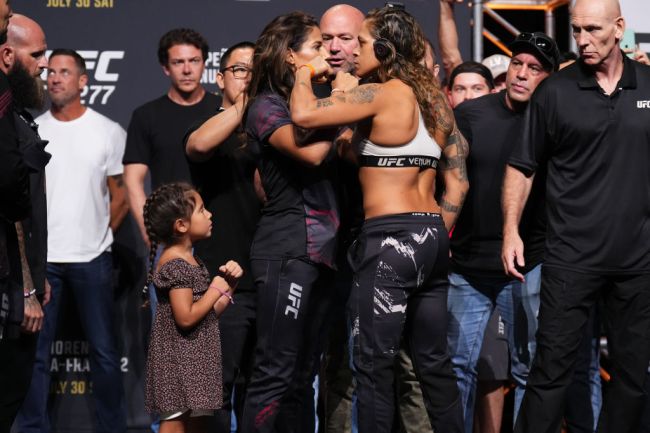 Julianna Peña and Amanda Nunes will run it back for the women’s Bantamweight Championship belt on Saturday’s UFC 277 main card.

The stage is finally set for the epic fight fans have all been waiting for. Current UFC champ Peña is hoping to silence the doubters by defeating “The Lioness” for a second time, even claiming she’d resort to underhanded tactics to defend her title.

In the other corner, UFC Featherweight champion Nunes looks to reclaim her title as the double champ following her shocking upset loss at UFC 269. With so much on the line for both fighters, things got intense in the lead-up this week.

That intensity bled into Friday’s ceremonial weigh-ins, however, the final staredown did provide a rather adorable moment. As Peña and Nunes came face to face, Peña’s daughter can be seen raising her own fists in support. Like mother, like daughter!

Julianna Pena's daughter had her back for the faceoff ❤️ #UFC277 pic.twitter.com/Pc76ymoZa8

Julianna Peña might just have the bravest supporter in her corner. There’s clearly a resemblance between her and her daughter as neither fear Nunes, who many consider to be the greatest women’s fighter ever.

In lead up to UFC 277, Friday’s weigh-ins saw both Peña and Nunes make weight. Peña cut it close though, stepping onto the scale with just 90 seconds left in the two-hour window. Maybe she was giving her daughter tips for the staredown.

Champ Julianna Peña was the last #UFC277 fighter to weigh in, stepping on the scale with 90 seconds left in the window.

But then she came in UNDER the mark. Troll job? 🤔

Will “The Lioness” reclaim the Bantamweight belt? Or will “The Venezuelan Vixen” continue her reign over the division? Legacies will be defined at UFC 277 on July 30th.

Even if Peña falls short this Saturday, her daughter will have her back no matter what. And if she comes out on top, fans can surely expect more adorable photo ops.