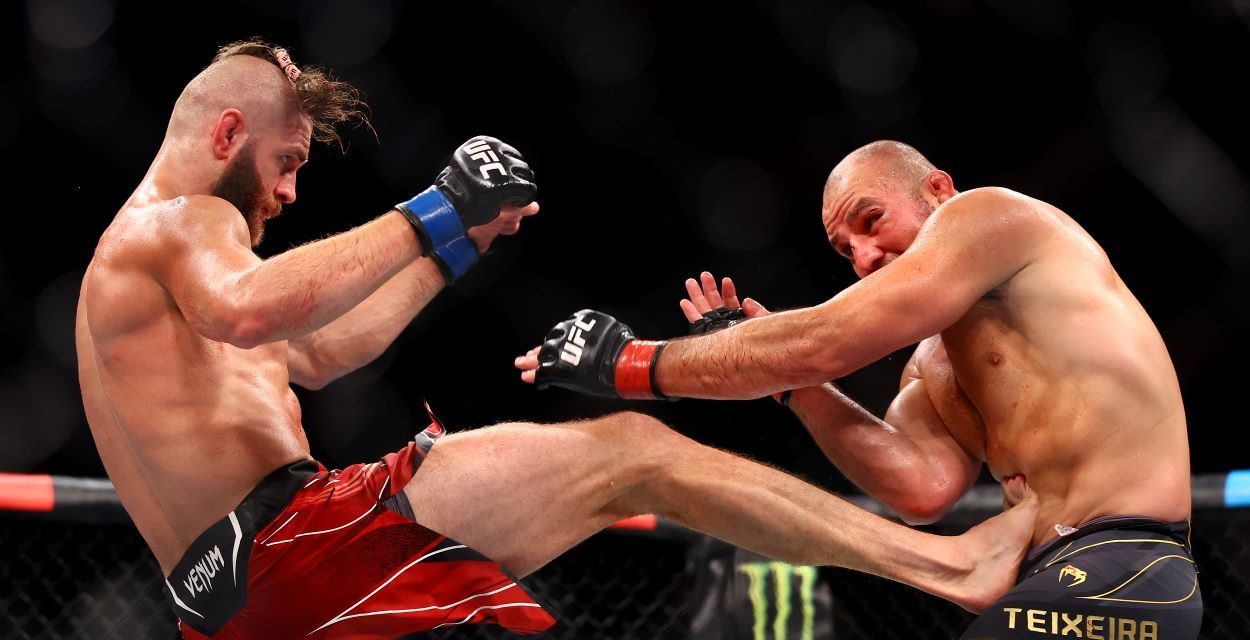 UFC 275 was an absolute banger of a fight card.

Four of the five fights on the main card were decided by finishes. Three had knockouts or TKOs, and it was capped by an incredible Light Heavyweight title fight that featured Glover Teixeira and Jiri Prochazka.

Prior to the main event, Jack Della Maddalenna made himself a household name with a first-round knockout. Jake Matthews knocked out Andre Fialho in a crazy fight. Zhang Weili retired women’s Straweight legend Joanna Jedrzejczyk and Valentina Shevchenko won a banger of a a fight with Talia Santos to retain the women’s Flyweight belt.

OMG! ZHANG WEILI KNOCKS OUT JOANNA.J IN THE SECOND ROUND. THE CROWD IS GOING NUTS OMG! #UFC275 pic.twitter.com/sIRxB5dLfl

Teixeira entered as the reigning champ after submitting former champion Jan Blachowicz in his last fight in October. Prochazka, meanwhile, entered as one of the UFC’s hottest prospect. He had won 12 consecutive fights entering the title bout including his first two fights in the UFC. Both of his UFC fights ended via knockout, including this wild spinning back elbow against Dominick Reyes.

Teixeira And Prochazka Cap Off Banger Of A UFC 275 Card

The main event between the two Light Heavyweight stars delivered the goods and more.

Teixera came out of the gates hot, taking Prochazka down and nearly submitting him in the first round. Then Prochazka steadied himself and appeared to be round two, but Texeira answered with a huge knockdown to steal the round on all three scorecards.

Things began to swing in the third round, with Prochazka landing continuous heavy shots and nearly ending the fight. Round four was much of the same as the two entered the final round with the belt up for grabs. The last round was a whirlwind, with Teixeira nearly finishing Prochazka multiple times, but the challenger had an answer, Prochazka was eventually able to take Teixeira’s back and sink in a rear naked choke to the win the title with just 28 seconds left on the clock.

Casually being WRONG. That last round if it goes to the scorecards could have gone to Jiri. Two judges would have given them a draw… i will say Round 3 wasn’t a 10-8, but it was a lot closer than people think. pic.twitter.com/qaehnHkVbI

…capping off the Fight Card of the Year. #UFC275

The main event, in particular, had fans buzzing on Twitter.

Glover Teixeira and Jiri Prochazka every few minutes of every round. #UFC275 pic.twitter.com/czKRwAKfgF

Jiri Prochazka taps Glover Teixeira with about a minute left in the 5th. I'm speechless. One of the most insane fights of course produced an insane finish.

"What a f—ing fight!" – Dana White's reaction to Glover Teixeira vs. Jiri Prochazka 🤯 (via @danawhite) pic.twitter.com/rQRwj1FSOP

ONE OF THE GREATEST FIGHTS OF ALL TIME! 🤯#ANDNEW Jiri Prochazka submits Glover Teixeira with :34 seconds left in round 5 👑 pic.twitter.com/0eq9lTPJFy

After the fight, the 42-year-old Texeira said he intends to continue his UFC career. Rematch incoming?