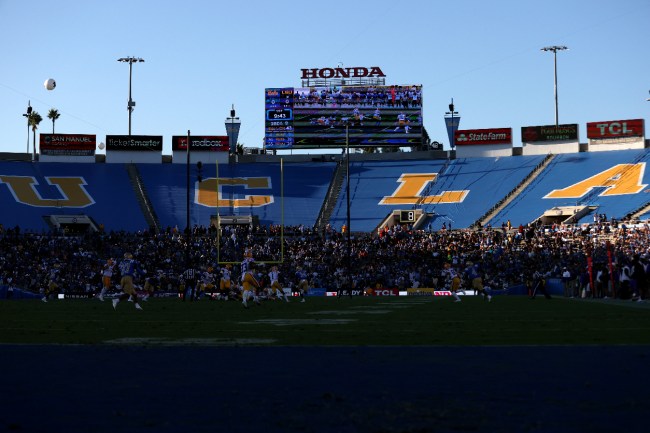 The college football world as we know it just continues to change by the week. And it all started because of the bombshell that USC and UCLA are heading to the Big Ten Conference in 2024.

The Big 12 reportedly has a half dozen Pac-12 teams in mind to expand their conference, and the Big Ten is still waiting for Notre Dame to decide whether or not to join.

So, the dust isn’t even close to settling after the Los Angeles schools announced their decision to leave the Pac-12.

But, the reason behind the move is simple: It’s a financial situation.

At least for UCLA, the financial aspect was the driving force in the decision to move conferences, according to Bruins athletic director Martin Jarmond in a recent report from Ben Bolch of The Los Angeles Times.

“If you love Olympic sports, you should be a fan of this move. When your program is in significant debt, it’s difficult just to maintain, never mind to invest. This not only preserves the programs now — which was not a given — but also will allow us to invest in them. This move allows us to reimagine what UCLA athletics can be with more strategic investment and resources.”

According to Bolch, UCLA has a deficit of just under $103 million. And according to Jon Wilner of The Mercury News, UCLA and USC could make $100 million annually by moving to the Big Ten.

So, that makes perfect sense for the timing and the logic behind the transition. Plus, both programs will enter a talented conference in football and basketball, making the games must-watch TV, as if they weren’t already.