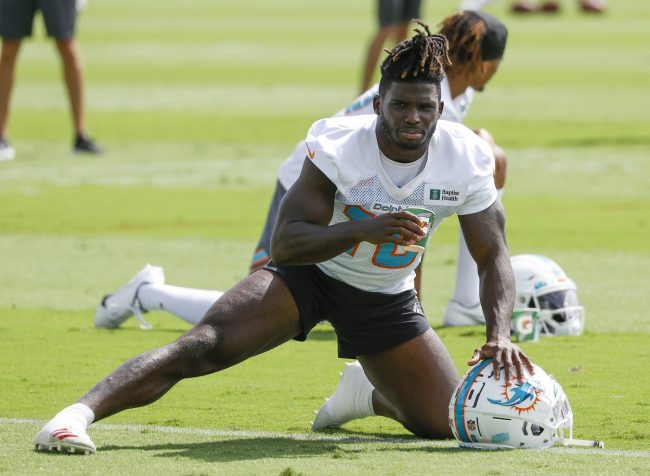 Hill joined the Dolphins from the Kansas City Chiefs in a blockbuster trade back in March. The six-time Pro Bowler couldn’t agree to a contract extension with Kansas City and was eventually dealt for a huge haul of draft picks. Hill then agreed to a four-year, $120 million extension that made him the highest-paid wide receiver in the league.

The speedy wideout has been the consummate teammate according to all reports since joining Miami. More than anything, he’s been wildly supportive of Dolphins quarterback Tua Tagovailoa. Miami drafted Tagovailoa with the fifth overall pick of the 2020 NFL Draft. But the Alabama product has struggled since that point. He’s started 21 games and thrown for just 27 touchdowns against 15 interceptions. At 49.7, Tagovailoa ranked just 18th in the league in total QBR in 2021.

But Hill is still bullish on the young signal caller, claiming that Tagovailoa is a more accurate passer than Chiefs superstar Patrick Mahomes.

Tyreek Hill says that @Tua is a more accurate QB than @PatrickMahomes pic.twitter.com/LUbhp2n8YK

Tyreek Hill Isn’t Backing Away From His Comments

After receiving insane death threats over the silly but fairly innocuous comments, Hill tried to clarify what he meant. But he still didn’t walk them back. And in case fans thought he changed his mind since then, Hill is now doubling down.

Tyreek Hill calls Tua Tagovailoa the most accurate quarterback in the NFL. (No pressure this year, Tua. None whatsoever.) https://t.co/VPx8hC2f6Y

In an interview ESPN First Take interview, Hill was asked what separated the Dolphins from the Jets, who also pursued a trade for the wide receiver.

“Zach Wilson is a dog, but I wanted to play with the most accurate quarterback in the NFL,” he said.

To Hill’s credit, accuracy is just one part of being an NFL QB and it’s something Tagovailoa does very well. The young Dolphins QB was seventh in the league with a completion percentage of 67.8% in 2021. That’s well ahead of Mahomes in 17th at 66.3%.

But his latest comments aren’t doing anything to help the pressure on a young quarterback set to enter a pivotal year for his career. With Hill, first-round pick Jaylen Waddle and tight end Mike Gesicki at his disposal, Tagovailoa has plenty of weapons. Here’s hoping he can find a way to live up to the expectations Hill is setting for him.