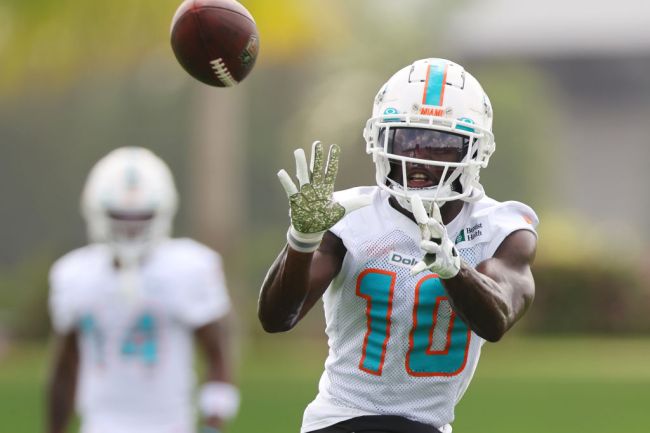 The Miami Dolphins made a blockbuster move back in March by acquiring superstar wide receiver Tyreek Hill from the Kansas City Chiefs and it’s proven to be an endless source of entertainment ever since.

The internet first lost its mind when Hill claimed Tua Tagovailoa was a more accurate passer than Patrick Mahomes. Then he doubled down by suggesting his new team is of the same caliber as his 2019 Super Bowl-winning Chiefs. Clearly, the highest-paid wide receiver isn’t shying away from bold statements.

Recently joining the “BS w/ Jake Paul” show, Hill was asked who he’d like to fight given the opportunity. It seems he’s already considered the possibility and there’s only one trash-talking defensive back in his mind—Jalen Ramsey.

“I just wanna go at the bully”

Co-host Dejuan Butler initially suggests Hill should fight former NBA star Nate Robinson, who Jake Paul beat in 2020, but the Dolphins WR brushed it off as too easy. After a short thought, he called out one of the best DBs in the NFL instead.

“I really want some of Jalen Ramsey though, for real,” Hill revealed. “If we just being completely honest right here. I just wanna go at the bully.”

Beyond elite performance on-field, Ramsey is also known as one of the most vocal trash-talkers in the league. While Hill admits no real beef exists between him and the Los Angeles Rams cornerback, it seems he’s taken note of Ramsey’s reputation.

Given the recent wave of former professional athletes venturing into combat sports, the possibility of this matchup between a top WR and top DB isn’t entirely out of the question. While Ramsey has a 3-inch height advantage, fans are split on who they have coming out on top.

Ramsey would own him 🤣

Jalen would drop him 1 hit 😂

I ain’t gon lie… Jalen a lock down CB & all on the field but I’m going with Hill on this.

Both Tyreek Hill and Jalen Ramsey are still in contention for more Super Bowl rings, so it’s unlikely they’ll trade in the pads for gloves anytime soon. That said, anything can happen.

It’s not the first time someone has been interested in taking on Ramsey either. AJ Green threw punches at him mid-game in 2017 and both were ejected for the scuffle.

With no Dolphins vs. Rams matchup this year (unless both teams reach the Super Bowl), NFL fans will have to wait for any developments on this potential fight.