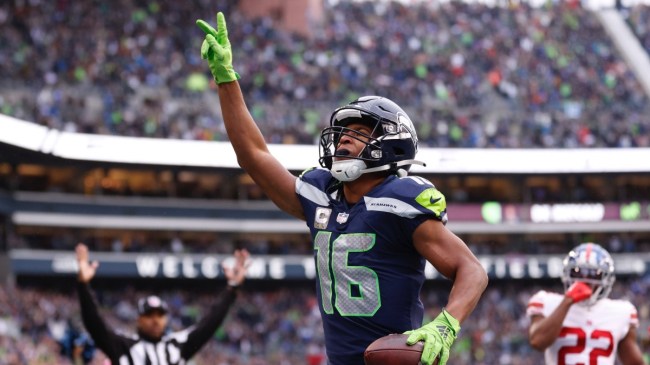 The struggles of Russell Wilson and the Denver Broncos have been well-documented. Even after a win on Sunday over the Jaguars in London 21-17, Denver is a mediocre 3-5 and look terrible.

Meanwhile, the team he left, the Seattle Seahawks, were left for dead before the season. Many thought they’d be in contention for the first overall pick in the draft. But, behind journeyman quarterback Geno Smith and great coaching from Pete Carroll, they are 5-3 after beating the New York Giants 27-13 on Sunday. And, after the game, longtime Seahawk wideout Tyler Lockett had a pointed comment that could’ve been throwing shade at Wilson.

Tyler Lockett appeared to take a shot at Russell Wilson

After the Seahawks’ win, Tyler Lockett went to the podium for the postgame press conference. Lockett had a drop that would’ve been a touchdown in the game, but later on beat a Giant defensive back on a double move for a crucial touchdown.

There, he said this about the Seahawks’ success.

Tyler Lockett with a not so subtle shot at Russ?

Wow. Now some could argue that it’s not about Wilson, but the consensus on social media is that it certainly is.

People need to stop reaching! I’ve said this quote like 5-10 times since I’ve been in the league. Stop looking for a story and just let us enjoy our team https://t.co/IcppxFEqik

But, people just are not buying it.

Wow you know it was bad when Russ is catching strays from Tyler Lockett.

I’m sure there will be more to this story as the week goes on.