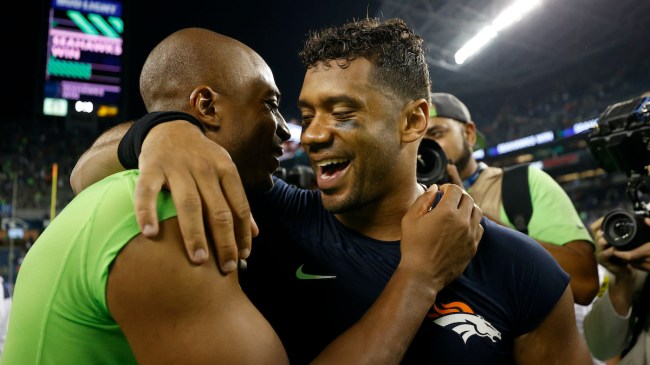 Sign stealing is a generally frowned upon practice in sports. Case in point, the Houston Astros. But what happens if you’re not stealing the signs and just already know what they are?

Well, that’s what happened with Tyler Lockett and the Seattle Seahawks when they faced Russell Wilson and the Denver Broncos for Monday Night Football. One would assume Wilson would switch up his signals upon changing teams, especially when facing his former team in Week 1, but apparently not…

On Friday, the Seahawks posted their mic’d up highlights and Lockett can be heard noticing his former quarterback using some familiar hand signals.

Interesting: #Seahawks WR Tyler Lockett told teammates that Russell Wilson is still using the same hand signals he had when he was in Seattle.

Lockett: "If you see this…"

That’s right, Lockett actually calls out what’s going to happen on multiple plays after realizing Wilson was still using signals from his days with the Seahawks.

“If you see this,” Lockett tells safety Tariq Woolen while tapping his wrist. “It’s a go!”

Then the Seahawks WR is seen shouting on the sideline as it happens in-game.

“They got our same stuff. I literally called it,” Lockett said.

You’ve got to question what Wilson and the Broncos were thinking here. Were they just hoping the Seahawks wouldn’t notice? Perhaps it’d be understandable if the Broncos played a different team in Week 1. But no, they played the team where Russ spent his last 9 seasons.

At least it takes some of the heat off Nathaniel Hacketts’ bewildering late-game decision, given it’s been revealed that the Broncos were disadvantaged from the start.

Luckily for them, Lockett was a good sport about it after the game. He told Broncos receivers Courtland Sutton and KJ Hamler that they needed to “change them signals.”

You’d expect the Broncos to change their signals now that this has been revealed. But then again, that should’ve been done before their game against the Seahawks.