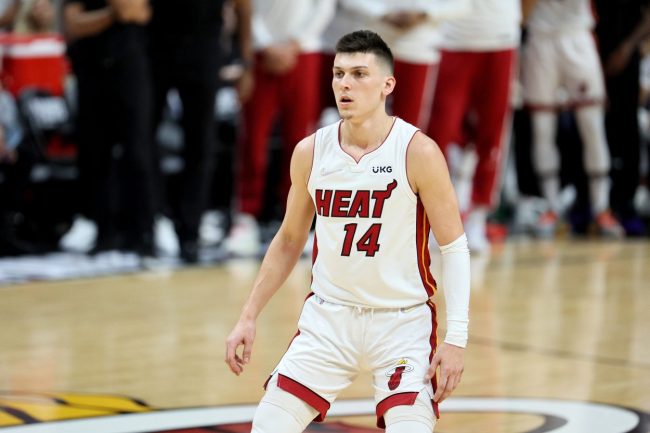 Tyler Herro’s NBA offseason has been absolutely crazy. The Miami Heat guard, who was named the 2021-22 NBA Sixth Man of the Year, feels like he’s constantly in the news.

Some of that is Herro’s own doing, as he allegedly cheated on his longtime girlfriend, Katya Elise Henry, causing their breakup. Herro and the Instagram model have a daughter together. They’ve since gotten back together and Herro and Henry are expecting a second child together.

Then there’s the things that aren’t Herro’s fault. The three-year NBA veteran has been at the center of Miami Heat trade talks involving both Brooklyn Nets superstar Kevin Durant and Utah Jazz All-Star Donovan Mitchell. Herro obviously can’t control that.

Here’s what he can control.

Herro can control what tattoos he doesn’t and doesn’t get. And the chest tattoo that he showed off to the world on Friday was one of the worst tattoo’s we’ve ever seen.

Heat Guard Tyler Herro showing off the chest ink during a summer workout, “No Work, No Check!” 💰🏀✅ #HEATCulture #NBA pic.twitter.com/KAuJlf6oEF

I mean, that is one of the worst tattoos I’ve ever seen. We’ve got a cross there at the center. That’s fine enough. Herro’s birth year is at the bottom for some reason. There’s a weird wolf-looking thing across his chest. Maybe the wolf is a priest? And then “No Work. No Check” written in joker-esque red above it. What in the world is happening here?

Omg this has to be one of worst tattoos in some many ways. The message sucks, the art sucks and the placement sucks.

I thought of this guy when I saw this pic.twitter.com/IUOXhU38RR

one or the worst chest pieces ive seen https://t.co/DCCqZkXihN

I love that the nipples look like blushing anime cheeks https://t.co/uEmzC3tB6B

thats what he spends with his money?? My god that is awful. https://t.co/tysOrDJHUQ

That is just an unholy disaster of a chest piece that Herro is going to regret the rest of his life. But hey, at least everyone else in the NBA now has new trash talk material.