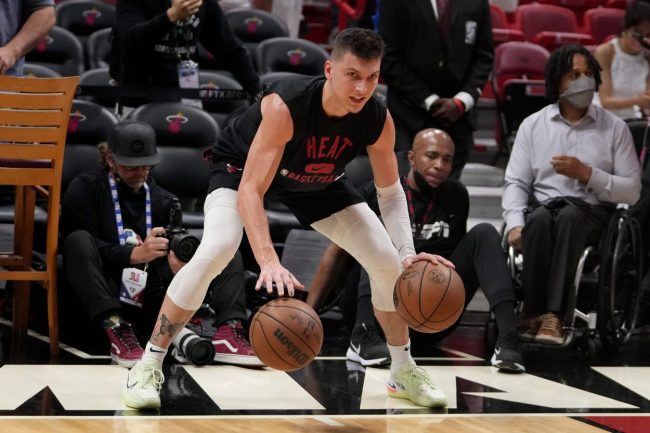 Miami Heat guard Tyler Herro is coming off perhaps his best season yet in the NBA. The Kentucky product averaged 20.7 points per game to go along with five rebounds and four assists. He helped lead the Heat to the Eastern Conference finals and for his efforts was named NBA Sixth Man of the Year.

But it’s been a strange offseason for Herro. It began with rumors of a split from his longtime girlfriend, Instagram model Katya Elise. The pair then got back together and since the announced that they are expecting a second child together.

Herro then got absolutely fried on social media after a video emerged of him practicing without a shirt, showing off what is the absolute worst tattoo than you will ever see.

Now that all of that is in the past, Herro is back on the court and back to doing what he does best. That includes making defender look absolutely helpless trying to guard him. Apparently, he takes no prisoners. A new clip of Herro hit Twitter on Monday night and shows him absolutely destroying a poor kid who tried to guard him at a basketball camp.

You may think that the move a little unnecessary. But Herro had to regain his pride after getting cooked at a previous camp he hosted.

Never forget when a Kid cooked Tyler Herro in his own camp.pic.twitter.com/bEwj9bOPed https://t.co/hb2Q4PVScP

Defense has never been Herro’s forte. But that’s an absolutely brutal look for the young star. We can completely understand why he’d need to take out his frustrations this time around.

Prayers up for Steve Nash if this is true. https://t.co/8Na31jYsjf

The video serves as a stark reminder to the kid that he better be ready to guard up when he steps on that court.