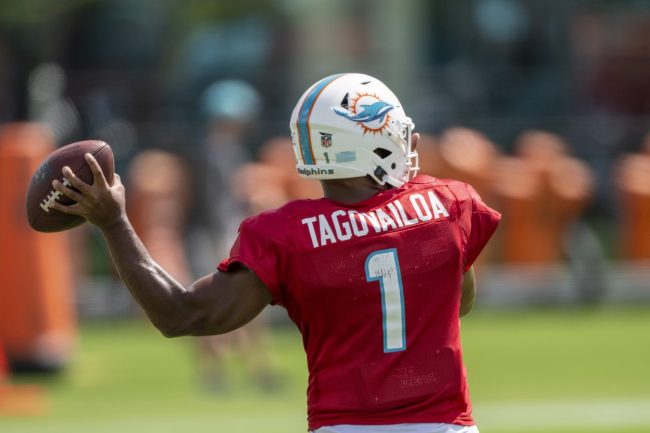 All that talk from Tyreek Hill seem to be working wonders for the confidence of Miami Dolphins quarterback Tua Tagovailoa.

The third-year signal caller from Alabama has struggled at times in his NFL career. In 23 career starts, he’s thrown for just 27 touchdowns to go along with 15 interceptions.

Those struggles, in part, led to the Miami Dolphins and owner Stephen Ross to pursue Tom Brady after he announces his retirement from the league following the 2021 season. Ross and the Dolphins have since been heavily penalized for tampering with Brady not only once, but twice. Miami also reached out to the QB in 2019 when Tagovailoa was still in college.

According to a report by ESPN’s Marcel Louis-Jacques, Tagovailoa is completely unbothered.

“Yeah, I mean, I’m still here,” he said to reporters on Wednesday. “To me, that’s all noise at this point.”

Thanks in large part to Hill’s comments, Tagovailoa has been in the news for much of the NFL offseason.

“I would say the only thing that gets frustrating is if you hear it every day or if you see it every day,” he said. “For me, I eliminate all of that. Don’t hear it. Don’t see it. I go home, go to my family, study, wake up the next day, come back and enjoy football. I hear everything obviously from the media and then when [the communications staff] preps me for whatever you guys are going to say, then I’m like, ‘Ah, I’ve got to answer this. All right, let me figure out something politically correct to say.'”

The two teams will meet at 7:30 on Saturday at Tampa Bay’s Raymond James Stadium to kick off their preseason actions.