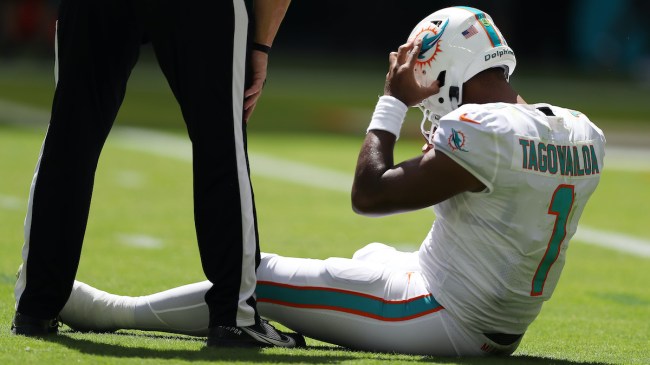 When Tua Tagovailoa exited the game just before halftime with an apparent head injury, fans hoped it wasn’t too serious. However, they certainly weren’t expecting him to return let alone start the second half.

With two minutes left in the first half, the Dolphins QB hit the ground hard after a late shove from Bills linebacker Matt Milano. Tagovailoa’s head snapped back and slammed into the turf causing immediate concern for a head injury.

Even worse, he was clearly wobbly upon getting up and stumbled before falling back to his knees. Tagovailoa was helped to the locker room for further evaluation and designated as questionable to return.

It was a frightening scene for everyone watching. Most fans suspected that he suffered a concussion and thus expected the apparent injury to sideline him for the remainder of the game.

Tua went to the locker room. Teddy Bridgewater is in.

Given that Tagovailoa needed his teammates’ help to stand upright before heading into the locker room, nobody thought he’d be in any shape to continue playing.

So it was a huge surprise when he ran out of the tunnel seemingly ready to start the second half. He had somehow cleared concussion protocols and medical personnel allowed him to return to the field.

#Dolphins QB Tua Tagovailoa is back on the sideline and will start the second half. So there's that…

NFL Fans Were Shocked By Tua Tagovailoa Returning Vs. Bills

Fans were understandably shocked. They expected some sort of serious injury after the frightening scene that unfolded just before halftime.

Since fans were convinced that Tagovailoa had suffered a concussion, they didn’t understand how he could return without issue.

I’m not sure I understand concussions anymore https://t.co/Oj2NUbwYZD

Other fans were more critical of the NFL. Even if medical personnel determined that Tagovailoa didn’t have a concussion, some still strongly disagreed with allowing him back in the game.

It’s a reasonable concern considering the scary shape the Dolphins QB seemed to be in not too long ago.

I cannot believe they let Tua back into the game… win or lose I vehemently disagree with that decision. #FinsUp

Later reports appear to clear up the confusion. While fans expected Tagovailoa to have suffered a concussion, it turns out it was an issue with his back instead.

Ian Rapoport of NFL Network reported that Tagovailoa “tweaked his back in the 1st quarter” and the late shove before halftime reaggravated it. The doctors determined that the quarterback’s wobbly condition resulted from that back injury and not a head injury.

My understanding of the Tua Tagovailoa situation: He tweaked his back in the 1st quarter on a sneak and didn’t miss time. After the Matt Milano hit, his back locked up — leading to him wobbling. Into the locker room for a full concussion check. Fully cleared. Now on the field.

Tagovailoa led the Dolphins to a 21-19 victory over the Bills, even withstanding a hilarious butt punt that resulted in a safety.

The Dolphins QB appeared unfazed by the earlier injury and connected for some big gains on multiple occasions. Even still, the medical staff’s ruling on the apparent head injury didn’t convince everyone.

The NFLPA has now launched an investigation into how the team handled the situation following the game.

The NFLPA is launching an investigation into how the Dolphins handled Tua Tagovailoa’s concussion check against the Bills, per @TomPelissero pic.twitter.com/rbSu7qaKWz

The hope is that the team did follow the correct protocols. It was in their best interest to do so at the end of the day. Tua Tagovailoa is the team’s franchise quarterback for the future and risking his safety for one win isn’t smart or ethical.

Nevertheless, it was an unsettling situation. Dolphins fans will hope whatever the injury was doesn’t plague their quarterback in the future.