Tua Tagovailoa Opens Up About The Difficulties Of Sliding, Blames His Competitive Nature 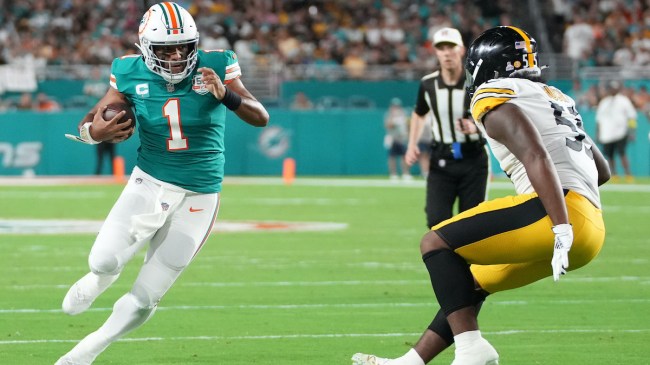 Dolphins QB Tua Tagovailoa just can’t seem to avoid contact out on the field and his latest comments seem to suggest that isn’t changing anytime soon.

The former Alamba standout made his return to the gridiron on Sunday against the Pittsburgh Steelers after suffering a scary concussion in Week 4. While fans might’ve expected a more cautious approach in his first game back, that’s not what happened.

Much to football fans’ dismay, Tagovailoa didn’t shy away from contact. He even lowered his shoulder in two separate instances for the first down, resulting in some hard hits from Steelers defenders.

Tagovailoa was asked about the seemingly unnecessary contact during a media session on Wednesday and his response certainly didn’t ease any concerns. He acknowledges his coaches’ wishes for him to slide but still had some mixed opinions about it.

Tua Tagovailoa Blames Competitiveness For Lack Of Sliding On Scrambles

Dolphins QB Tua Tagovailoa said that his coaches have told him to slide to avoid injury, but "it's football"… Here's his full answer pic.twitter.com/3et1myKnPv

The Dolphins QB appears to blame his competitive nature for always wanting to do more for the team. As a result, his first thought isn’t to avoid contact and slide during those in-game situations.

“I want to be able to continue making plays that I feel can contribute to moving the chains and helping our team. So, whatever it takes from me. But, then again, I’m going to tell you I’ve got to slide, I’ve got to do all that. But instinctively, it’s… I don’t know, it’s a weird competitive thing.”

Tagovailoa’s competitiveness is respectable, but the Dolphins’ coaching staff is ultimately right. An extra yard through contact simply isn’t worth the potential injuries, especially after everything that’s already happened this season.

It doesn’t help that the Dolphins starter is under extra scrutiny after his recent concussions, but the message still stands either way. It may go against his instincts, but sliding more will help the longevity of his NFL career.

Dolphins fans will hope to see more slides and smarter decisions from Tagovailoa, starting on Sunday against the Detroit Lions.